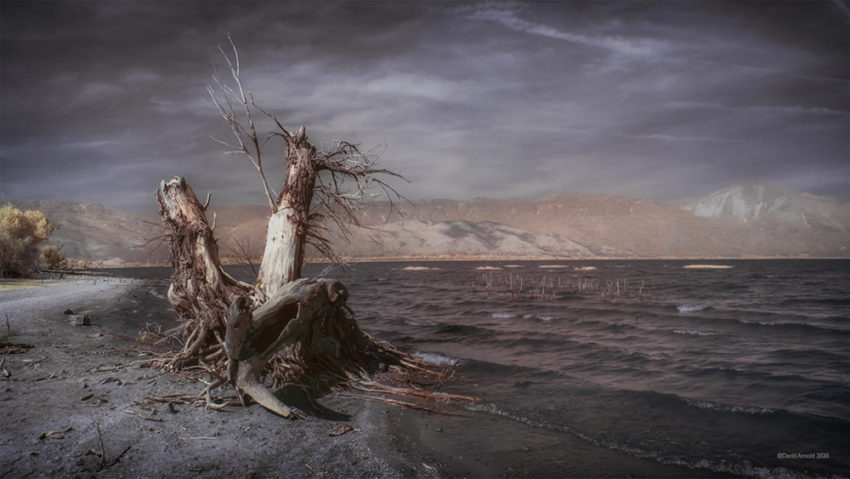 Early 19th-century photography was only able to record light falling in the blue and the ultraviolet portion of the electromagnetic spectrum. This very limited spectral range is best seen in the blank white skies in landscape photography in the mid-19th century. [1] By the 1880s and following the addition of sensitizing dyes to silver gelatin dry plates, improvements to photographic emulsions permitted photographers to record subjects from the ultraviolet into the green portions of the visible light spectrum. By the early 20th century, panchromatic emulsions appeared on the market. These new emulsions were sensitive to the entire visible light spectrum, improvements that ushered in the first viable color photographs, and the epic landscapes of Ansel Adams, as seen towering cloudscapes over Yosemite National Park. [2] Both achievements are the direct result of the introduction of panchromatic emulsions.

Photographers and artists are experimenting with photographing subjects that are literally beyond human sight, recording scenes in “false colors” that are not grounded in human perception. [3] In most cases, photographers are using traditional digital cameras which are modified to remove UV and Infrared filters from the sensors, or using external infrared filters mounted on their lenses. The unusual and unpredictable colors achieved through these experiments are fascinating.

In the two slide shows presented above and below, a Panasonic Lumix G-9 mirrorless camera modified for full-spectrum capture was fitted with an external mounted LifePixel Enhanced Color Infrared 665 nm filter over a Pansonic Lumix F2.8 lens. Each photograph was color corrected and intuitively adjusted using Adobe Photoshop.

Digital camera sensors are inherently sensitive to infrared light, visible light ultra-violet light. Infrared radiation can make conventional digital photographs pink or fuzzy because infrared focuses on a slightly different point than visible light wavelengths. To improve visible-light imaging, digital camera manufacturers insert an infrared-blocking filter or IR-cutoff filter in front of the digital camera sensor to block most infrared light and improve image quality. The IR-cutoff filter does not block all infrared wavelengths, and most digital cameras can still record infrared radiation with the use of a filter—typically a deep red Hoya R72 or a true IR-passing filter such as an 87-series opaque filter. Because so much light is blocked with this method, long exposure times (sometimes approaching 30 seconds) are required.

With the removal of the infrared-blocking filter, digital camera sensors will record into the infrared spectrum and allow handheld photography with normal metering and focusing functions. Some early digital cameras such as the Olympus 2020z and C-3000 series, the Nikon 800 and 950 Coolpix, the Canon S10, the Kodak 260, and the Minolta Dimage 7 have become prized for their high infrared sensitivity. After 2004, IR-blocking filters became much more effective and typically cameras now require the removal of the IR-blocking filter in order to use them for infrared photography. [4] Several companies specialize in infrared conversion and provide prices and information for specific models. [5]

You can test the infrared sensitivity of your camera by pointing a remote control toward the lens and see if the beam registers in the camera’s LCD monitor. Next, you may want to test your camera by shooting with a Hoya R72 filter. You will know very quickly if your camera will record enough of the infrared spectrum to be serviceable for IR photography. IR radiation is highly unpredictable, varying with altitude and weather conditions.

In addition to modifying digital cameras to capture the portions of the infrared spectrum, cameras can be modified to replace the IR cut filter with a clear filter making the sensor sensitive to ultra-violet, visible, and infrared light, or what is referred to as full spectrum photography. Because of the increased sensitivity, full-spectrum modified cameras are useful with astrophotography and low light applications. In addition, once the camera is converted to full-spectrum recording, external filters can be placed over the lens to narrow the sensitivity to experiment with recording in specific segments of light.

In the examples shown below, external IR filters were placed over the lens of a Panasonic Lumix G-9 mirrorless camera converted to a full-spectrum recording. These examples were created at Washoe Lake near Carson City, Nevada in the early afternoon on a haze day. Each set of exposures include a raw, jpeg, and white balanced example. Several examples demonstrate post-processing with Silkpix Developer Studio 8 SE, a Panasonic camera raw processor, and further image adjustments using Adobe Photoshop. In addition, several examples include “channel swap” processing, a post-processing technique that switches the red and blue channels to achieve a distribution of blue light in the sky.