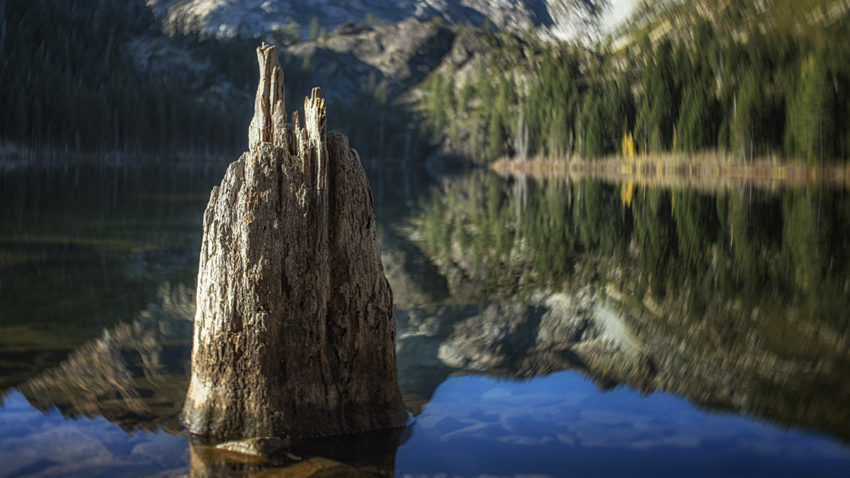 Humans see binocularly, whereas a camera lens records light with only one light source—monocularly establishing a single point of focus. The photographer chooses a single point of focus, giving emphasis and meaning to the image. By adjusting the focus in the image, a photographer can establish a hierarchy of focus and attention over the image. The viewer’s eyes are drawn to certain details and away from others through the use of focus controls on the lens. As Stephen Shore states in Nature of Photographs, “A gravitation of attention to the plane of focus. Attention to focus concentrates our attention.” [1]

Photographic attributes including shutter speeds, depth of field, and focal length control the visual qualities of photographs. Blurring and generating distortions with filters and lens aberrations, and using motion blur effects have been commonly used by photographers since the 19th century. These techniques experiment with seeing photographically and are often oppositional to those qualities delineated by master photographers such as Edward Weston, Ansel Adams, Paul Strand, and others. With the rise of precisionist aesthetics in the 1920s, the most cherished works were by photographers who, like Henri Cartier-Bresson, quested for the “decisive moment” and championed this moment as the bearer of truth. Others, as exemplified by Weston and Adams, championed clarity of vision and largely avoided the moving subject. Although blurred and out-of-focus images were accepted as part of the medium, they were typically treated as suspect, as regrettable mistakes.

Until recently, the majority of photographers who experimented creatively with lens blur and out-of-focus imagery worked outside of mainstream photography. These photographers believe that visual realities can be felt as well as seen, and are as fascinated by what is left out of the photograph as what is contained within it. They intuitively express their conviction that the medium is not restricted to the sharply-focused details of our everyday world, but that photography can also record indecisive moments. These deliberate attempts to court accidents and the mysteries of extrusive time undermine the authority of transcription photography and posit a restructuring of seeing photographically.

As seen in photographs of Uta Barth, Bill Armstrong, Hiroshi Sugimoto, and others, postmodern theories of identity, indeterminacy, and circular meanings have given energy to investigations of transient and ambiguous knowledge referenced in blurred photographs. This “distorted seeing” has had a long tradition in photography, though it is underreported and uncommented upon by most standard histories. These techniques are not unique to photography and manifest a type of seeing photographically set down by Moholy-Nagy in 1936 in “Eight Varieties of Photographic Seeing.” [2]

Since its launch in 2004 by professional photographer Craig Strong, Lensbaby has become an important addition to experimental photography. Lensbaby lenses were born from many years of experimentation with lens modification as Strong “joined an old Speed Graphic lens with a short Shop-Vac hose to shoot images otherwise impossible with a DSLR lens, which inspired the original Lensbaby lens.” [3] The original Lensbaby was a simple lens attached to a hard, flexible coil joined to the lens mount. The flexible coil pushed from one side to another, allowing the focus to be manipulated. In addition to the original fully flexible lens, Lensbaby has introduced adjustable focus tilt-shift lenses. Like the Holga, the Lensbaby has gained a passionate following.

Abandoned Cars, The Humboldt–Toiyabe National Forest, Ruby Mountains, Nevada. The Burnside 35 was set to F/4. Four overlapping exposures were created and then merged into a panorama using Adobe Photoshop’s “photomerge” feature. In the pick-up truck example, a sharp focus is centered on the broken headlamp and dented fender and drops off on the edges to accentuate the Aspen leaves swirling in a strong wind. With the abandoned sedan, a sharp focus is centered on the left side of the windshield and drops off in the trees. In both examples, a strong wind blowing up the canyon accentuated the blur in the fall foliage.

The Lensbaby lenses allow photographers to experiment with selective focus by bringing one area of your photo into sharp focus, with that ‘sweet spot’ surrounded by gradually increasing blur. Each Lensbaby lens is a tutorial in optical principles and each resulting photograph is a unique experimental creative lens design.

Lensbaby’s success has lead to increasingly sophisticated lens designs. Released in 2018, the Burnside 35mm lens is a high-quality Pertzval-inspired lens that creates a swirling bokeh or out of focus area. The F/2.8 Burnside includes a slider to control the image swirl and vignette. The amount of swirl is controlled by the aperture setting, with the most swirl occurring at the F/ 2.8 aperture setting. The Burnside 35mm features an impressive build quality reminiscent of vintage prime lenses from the 1960s.

All photographs in this article were created with the Burnside 35mm lens, with a Sony A-mount. during recent trips into the Sierra Nevada Mountains in Northern California and the Ruby Mountains in Eastern Nevada. The A-mount Burnside lens was attached to the Lumix S1R, an L-mount mirrorless camera, using a Novoflex A-mount to L-mount lens adapter.