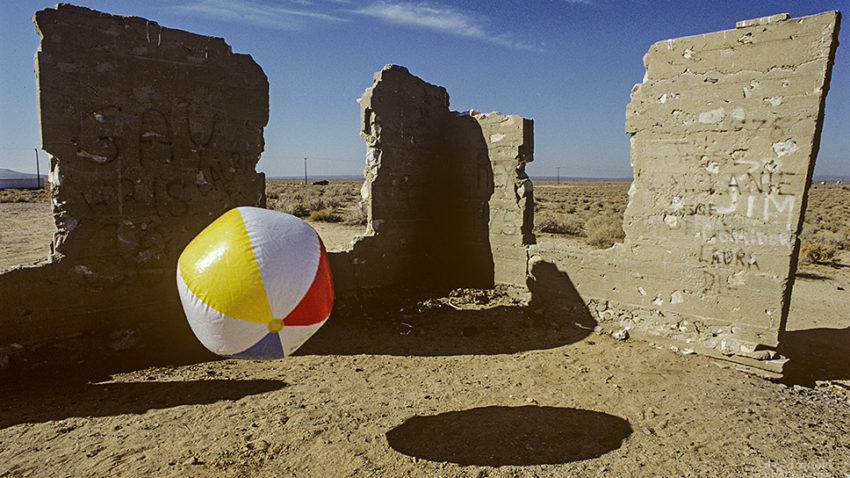 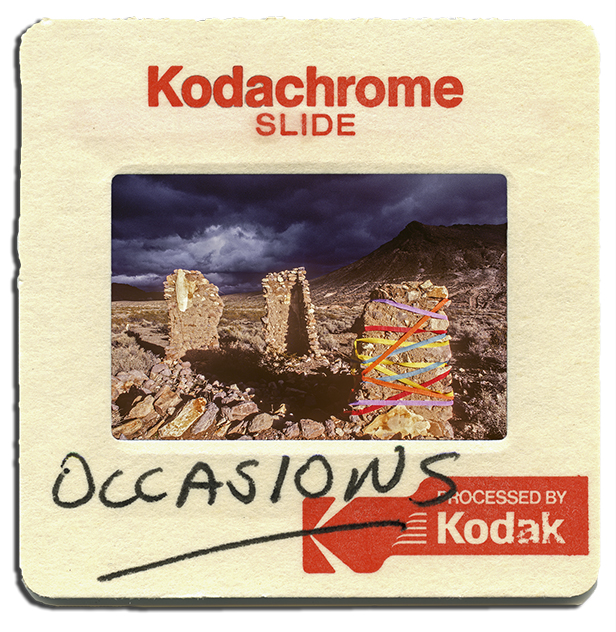 That the past is different from the present moment is its foremost attraction. The inspiration for Occasions begins within a deep fascination for the past and for abandoned relics of human habitation left on the western landscape. The insertion of the brightly colored party supplies into the ruins of the western landscape highlights the sharp contrasts between new and old, then and now. In addition, the simple, non-destructive, and temporary stagings of the Occasions Series speak to the transitory nature of our existence, and to the tensions of past and present intrusions into the western landscape.

The use of color in Occasions highlights the separation of the past from the present, and at the same time speaks to how different the past was from the present. Photographs contain a realization of loss in the sense that every photograph, whether a record of what is before the lens or a fabricated reality as we see in the Occasions, represents a past moment that actually happened but is no longer present. [1] Because the past is immeasurable and will never be completely known; and the more we seek to know and understand it, the more the past is transformed. Occasions invoke those mixed feelings of loss after the party is over when all that is left are stray decorations. The enigmatic stagings of Occasions fondly call out to that part of the past that remains unknowable.

Occasions were photographed in natural light with Kodak’s legendary Kodachrome 64 color transparency film using Minolta 35mm cameras and Pentax 6×7 cameras loaded with Agfachrome RSX II 100 color transparency film. Kodachrome and Agfachrome color reversal films were renowned for their color fidelity and superb detail. Mirroring the transitory existence of the relics of the western landscape which are the subjects of Occasions, the once dynamic and dominant films and color processes used in the creation of the Occasions have also receded into the past.

Selections from Occasions were first exhibited as part of the solo exhibition “Some Photographs” at the Manville Gallery, University of Nevada School of Medicine, Reno, Nevada (1985). House Ruin, Rhyolite, Nevada was included in the exhibition American Color (1987), curated by Jim Featherstone which toured nationally to seven venues. Three photographs from Occasions were featured in Robert Hirsh’s Exploring Color Photography, First Edition, 1989. The appearance here of Occasions is the first time that the entire series has been assembled and published.

[2] Kodachrome, first introduced in 1935 as a movie film and as a 35mm color slide film in 1936, signaled the beginnings of accurate, inexpensive, reliable, and easy to use color film. Prized for color longevity and a wide tonal range, Kodachrome has long been considered one of the finest achievements in film technology. Kodachrome was discontinued in 2009.  See Robert Hirsch, Exploring Color Photography, P. 15-29.

[3] Agfachrome was manufactured by the Belgium company Agfa-Gevaert. Agfachrome boasted pure reds and vivid colors. Agfachrome is a discontinued film, however, Agfa continues to manufacture color and black and white film, which is sold by Rollei/Agfa and Lomography.