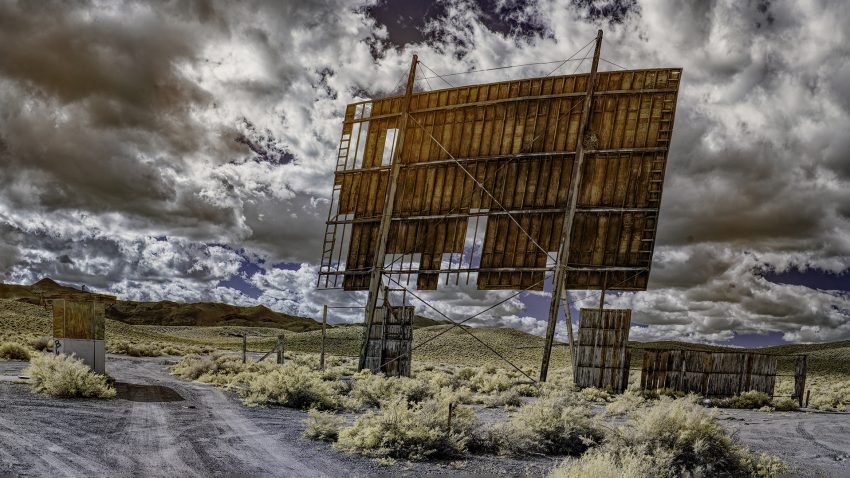 The first commercial drive-in movie theatre in the United States opened in 1933, just outside of Camden, New Jersey. In the car-centric late 1950s, drive-in theatres became very popular and reached a peak of over 4000 drive-in movie screens, nationwide in 1958. [1] One of the largest drive-in movie theatres featured spaces for 2500 cars, a children’s playground, and a restaurant on a 28-acre lot. [2]

Successful drive-ins required at least 15 acres of land and were located primarily in rural areas. With rising real estate prices and competition from video rental and expanding walk-in theaters showing first-run movies, the popularity of drive-in theatres began to wane. [3] Today, only 318 drive-in theatres remain in operation in the United States. [1]

The Sage Crest Drive-in opened in 1954 to a screening of Disney’s Living Desert. The theatre is located on Highway 95, outside of Yerington, Nevada, and near the abandoned massive Anaconda Copper Mine, of three superfund sites in the state of Nevada. The theatre featured a 65-foot-tall screen and could accommodate approximately 250 vehicles. The theater first closed in 1983 and re-opened several times over the years under new owners. Today, all that remains is a battered screen, ticket booth, a vandalized concession stand, and concrete-encased foundations for car speaker stands. The theatre officially closed in 1995 and later the site was transferred to the Bureau of Land Management. With ownership of the property falling to the BLM, the site has become popular with RV boon dockers seeking free camping sites.[4]

Sensing that site may soon be cleared, I returned in March 2022, hoping to add photographs of the site to an ongoing series, Abandoned Things. I found the screen further decayed, with more missing plywood, but still standing. The concession stand was thoroughly brutalized, with many of the car speaker stands and signage removed. Several campers had taken up semi-permanent residence on the west side of the concession stand, burning trash in an open fire.

These recent photographs of the Sage Crest Drive-in created with a full spectrum camera fitted with an external infrared filter accentuate the late afternoon clouds rolling over the site and present the abandoned site in unique color rendering. The infrared photographs are sharper than the earlier digital photographs taken at the site, bringing forward details in the plywood screen and the clouds moving over the site as well as presenting the namesake sage in a green-yellow glow.

The future of this historic site is uncertain, still, I was delighted to visit the site once again under optimum conditions for photography. David Arnold, April 2022.

2 thoughts on “Photographing at the Sage Crest Drive-in”