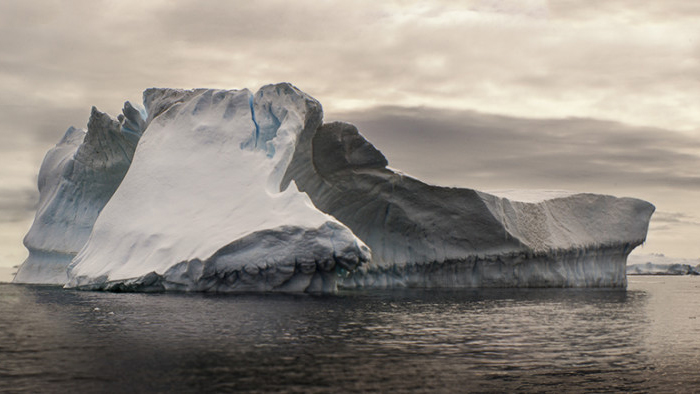 The Australian photographer, Frank Hurley is a unique case, and inexplicably his achievements remain largely unreported in many current histories of photography.  Although primarily known as a still photographer, Hurley would pioneer techniques first seen with his Antarctic expedition photography to create a wholly new entertainment form known as the “travelogue” or the “travel-adventure documentary” film.[1] Although his best work was completed one hundred years ago, his innovative approach to visual storytelling finds resonance in contemporary travel and adventure tourism. After participating in two Antarctic expeditions, Hurley was appointed an official war photographer for the Australian Forces during World War I on the Western Front. Hurley created sophisticated theatrical manipulations of his World War I photographs, often staging scenes and creating composite photographs in efforts to generate greater realism and drama. His controversial photographic techniques for the recording of the carnage of the Western Front foreshadowed the birth of the film industry and war as visual entertainment.  Hurley techniques were extended into the rising tide of photographically driven imagery after World War I. The success of Hurley’s revolutionary approach took hold in the emerging film and glossy magazine industries; his unique mixture of photography, cinema, and sound, all technologically driven, points to the expanding visual spectacle of the contemporary mass media.

Frank Hurley began his photography career in Sydney Australia in 1905 as a postcard photographer. Hurley (1885-1962) was an exceptional photographer, a gifted storyteller, fully attuned to the experimental potentials of photography. Beginning with Douglas Mawson’s Australasian Antarctic Expedition of 1911-14, Hurley participated in four Antarctic expeditions. Hurley’s photographs occupy a special place in the history of expedition photography. With few exceptions, expedition photographers were considered camera operators. Hurley’s approach directly challenged these notions as he considered himself a camera artist who often prepared and exhibited his photographs as signed works of art. [2] Over the course of his 60-year career, Hurley published over 20 books and his photographs and cinematography were featured in over 60 films. Today large archives of Hurley’s photographs are now housed in the Australian National Library, the Royal Geographical Society, the Scott Polar Research Institute, the Art Gallery of New South Wales, and the State Library of New South Wales.

Outside of Australia, Hurley is best known for his documentary photographs of Ernest Shackleton’s ill-fated Imperial Trans-Antarctic Expedition of 1914-1917, and known today as the “Endurance expedition.” Hurley’s stunning still photographs created during Mawson’s 1911-1914 expedition and his cine film of Antarctic blizzards came to the attention of Ernest Shackleton who hired him as the Imperial Trans-Antarctic Expedition’s photographer. Shackleton’s expedition intended a transit the Antarctic continent via the South Pole, however, the expedition ship, the Endurance, became marooned in the heavy pack ice of Antarctica’s Weddell Sea. Through two acutely cold Antarctic winters, Hurley photographed the Endurance and the daily life of the ship’s crew. Hurley’s photographs chronicle the eventual destruction of the Endurance, trapped for 15 months in the pack ice of Antarctica’s Weddell Sea, and then crushed in the shifting ice floes. Prior to the sinking of the Endurance, Hurley created approximately 500 large format glass plate negatives in addition to hundreds of feet of cine film. Prior to abandoning the crew’s camp on the Weddell Sea ice floes and taking to their lifeboats, Skackelton and Hurley culled Hurley’s negatives down to about 120 essential images, shattering the remaining glass plate negatives. Hurley then carefully packed the remaining glass plate negatives in tin containers and soldered them shut. That his Endurance expedition photographs survive to this day is a testament to Hurley’s photographic skill and to his perseverance in their preservation, as well as to the value which Skackelton and the Endurance crew placed on the expedition’s visual record. [4]

Under extreme conditions, Hurley created stunning photographs of the Endurance crew’s ordeal stranded on the shifting pack ice floes hundreds of miles from the solid ground until their eventual rescue from Elephant Island, an uninhabited island 150 miles north of the Antarctic Peninsula. With his men camped at Elephant Island, Shackleton set off with five crew members in a small lifeboat, the James Crain for the nearest permanent settlement, a small whaling station on South Georgia Island, 800 miles away across the world’s roughest sea. After a harrowing voyage, and four attempts to reach the stranded crew, the Endurance crew was rescued without a single life lost. As Magot Morrell and Stephanie Capparell point out in Shackleton’s Way, the expedition fell well far short of its goal, failing to even land the expedition on the Antarctic continent. Ironically, Skackelton became a legendary success through the exercise of his extraordinary leadership skills in bringing his crew safely home from the most remote corner of the world, a narrative accentuated by Hurley’s photographs of the failed expedition. [5]

Hurley’s aesthetic coalesced during the high water mark for pictorial photography. Reaching full maturity in the 1890s, Pictorial photography continued as the dominant mode of expression in art photography for several decades. At its core, Pictorial photography strove to integrate the formal aspects of art photography with the dominant theories of painting in the 19th century. Wildly experimental with equipment and processes, Pictorial photographers were the first to challenge the restrictive boundaries of 19th-century photography, and were the first to create photographs drawn from the imagination. [6] In an article appearing in the Australasian Photo-Review in June 1911, Hurley embraced the principle tenets of pictorial photography when he stated that camera art is “not an exact representation of nature, and a picture is not a record of things in view.” Further, Hurley encouraged photographers to embrace experimentation and to “regard your camera as an artist does his brush. Think that you hold a piece of apparatus worthy of the same possibilities of the artist…Your camera is but a piece of mechanical apparatus. You are its intellect.” [7] Even under the challenging conditions marooned on the ice floes of the Weddell Sea, Hurley put into practice the tenets of pictorial and experimental photography in his studies of the expedition ship stranded in the ice, including his work with the new Paget Color Plate Process and in his night photography where he literally painted the Endurance with light using magnesium flashbulbs.

Influences taken from pictorial experimentation are also found in the broad range of photographic equipment and processes Hurley used on the Endurance expedition. The “Heroic Age Antarctic exploration”, a 25-year period from 1897 through 1922 [8] was also an age of artistic and technical innovation and creativity in photography. At this time, photographic suppliers in Europe and America introduced a wide range of cameras and photographic products including panchromatic plate and roll films, nearly a dozen color screen processes, professional large format single-lens reflex cameras, and highly portable roll film cameras. When assembling photographic equipment for the Endurance expedition, Hurley was able to select from this long list of newly released cameras, lenses, and film processes available and assembled the most advanced and reliable equipment then available. Hurley’s photographic kit included three Folmer & Schwing Graflex single lenses reflex cameras, a Goerz-Anschutz folding plate camera, several Kodak Folding Pocket (FPK) No. 3A cameras, a Prestwich Model 5 cine camera, a Kodak Panoram Box Camera, and the revolutionary Vest Pocket Kodak camera. After painstakingly documenting the destruction and sinking of the Endurance, Hurley abandoned his extensive photographic equipment and carried with him for the remainder of the journey his small Vest Pocket Kodak camera. [9] Hurley was left with only three rolls of film and for the remainder of the expedition, exposed a total of 38 total images using the Kodak Vest Pocket camera including his photographs of the crew’s camp on Elephant Island and their eventual rescue in 1916.

In Appreciation of Hurley’s Antarctic Photographs

In late December 2015, I traveled with my wife Margaret onboard the National Geographic polar expedition ship, the Explorer to Antarctica. Knowing I would be traveling into the same waters chronicled in the Endurance expedition and in appreciation for the 100 anniversary of the achievements of Frank Hurley in Antarctica, [10] I carried with me a Vest Pocket Kodak camera and experimented with retrofitting the camera’s vintage lens onto a contemporary digital single-lens reflex camera. Like Skachelton’s Endurance, the Explorer is a repurposed Norwegian vessel designed for polar expeditions. After departing from Ushuaia Argentina at the tip of South America for the Antarctic Peninsula, the Explorer sailed briefly in the Weddell Sea in search of a colony of Emperor penguins. Unlike the crew of the Endurance, we traveled on the Explorer in the safety and comfort of a state of the art “ice reinforced” ship, however like the Endurance, the heavy pack ice of the Weddel Sea forced us to change our course.

Upon first viewing the massive icebergs on the seas approaching Antarctica, I felt single frames would not adequately encompass the visual intensity of the Antarctic landscapes. Like Hurley’s first view of the Antarctic landscape, I was especially captivated by the strange sculptural beauty of the variegated forms of ice. I immediately began experimenting with extending the aspect ratio of the traditional photographic frame in an effort to better interpret the unique landscapes of the Antarctica coastline. In order to better capture the odd arrangements of ice forms, for each final composition, three and sometimes 4 overlapping exposures were captured. Each set of overlapped exposures were assembled using Adobe Photoshop CC into an extended format better suited to the visual rhythm of tabular ice forms encapsulated the land and floating on the sea. At times, the intense light of the Antarctic presented challenges for shielding the handheld lens mount over the camera lens opening during exposure, and well over half of my exposures were overexposed or out of focus or damaged in some way. Maintaining adequate focus across multiple overlapped exposures, and many taken from a moving ship was also difficult. The nearly century-old lens Kodak Vest Pocket lens renders a much softer image than produced with contemporary color corrected lens, even so, I found echoes of Hurley’s early color experiments in the muted rendering of light and color using the Vest Pocket Kodak. Still, the lens performed surprisingly well given the challenging Antarctic conditions and I am especially satisfied with the conceptual blending of new and old photographic equipment, an approach certainly in keeping with Frank Hurley’s experimental approaches to photography.

“Freelensing” with the Kodak Vest Pocket in Antarctica

[8] Susan Solomon, “To the Ends of the Earth: the Heroic Age of Polar Exploration,” www.scientificamerican.com.

[10] In tribute to the one-hundredth anniversary of Skachelton’s Imperial Trans-Antarctic Expedition, the Royal Geographic Society recently digitized original negatives from their archives and have mounted an exhibition of Hurley’s photographs along with personal artifacts. Click here to view the online exhibition;
See also British Explorer dies crossing Antarctica.