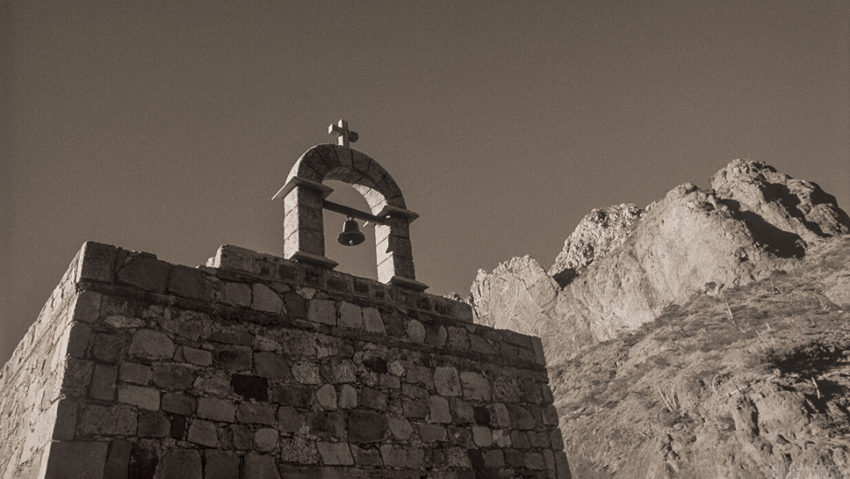 Churches of Stone highlights the architectural features of six stone churches in Baja California Sur, Mexico. The fortress-like profiles, the small windows, the clustered columns, and curved doorways carved into stone highlight the remarkable fact of the stone churches’ long existence. Designed to dazzle the newly converted, the stone churches of Baja California Sur transmit a spiritual zeal which transforms largely isolated and severe locations. The photographs focus on the vertical surfaces, which provide spaces for the play of light and shadows, and on the arched doorways, the windows, and the soaring bell towers which use a blend of architectural styles to delight the eye.  Also included are photographs of more humble outlying religious sites, located in proximity to original mission sites.

In 1697, Jesuit missionaries, guarded by a small detachment of Spanish soldiers, established the first permanent mission on the Baja Peninsula at Loreto. The Jesuits and followed later by two other Catholic religious orders, the Franciscan and the Dominicans, built a contiguous chain of missions, 50 in all, which stretched the length of the New Spain’s Baja Peninsula to the rolling hills just beyond San Francisco Bay in Northern California. While the missions in present-day California are preserved and restored and heavily visited, the missions of Baja Norte and Baja Sur California, except in the Lower Peninsula, have not fared as well. Many of the Franciscan and Dominican missions were built of adobe, and these structures, after abandonment, have largely fallen back into the earth from which they were formed. Begun by the Jesuits in the 18th century, and completed by the Dominicans, eight intact stone churches remain in Baja California Sur. Built of native stone, these austere architectural treasures have survived over 300 years in an extreme environment. The stone churches blend multiple architectural styles present across New Spain and include Gothic, Neo-Gothic, Moorish, and Baroque features. Deeply influenced by the high Baroque styles popular in the 17th and 18th centuries, the stone churches of Baja Sur express the intense spiritual energy of the Jesuit priests and the triumphant power of the Spanish conquest. [1]

The Jesuit colonization of Baja was organized on a theological foundation. With degrees in philosophy and the sciences, the Jesuits commanded the soldiers who accompanied them as well as the tightly controlled civilian populations. Attuned to the architectural styles and sensibilities of their time, these learned men created an unprecedented colonial experiment which resulted, for a short time, in the colonization of the central and southern parts of the Baja peninsula. All told, the Jesuits founded 21 missions in Baja’s inestimably beautiful yet inhospitable landscape. After centuries of royal favoritism and political overstepping, the Jesuits were expelled by royal decree from Baja and the New World in 1767. Replaced first by the Franciscans and later by the Dominicans, these priests carried on the operation of the ex-Jesuit missions and went on to found 9 new missions on the Baja Peninsula and 21 more in present-day California.[2]

Missions were entire communities that encompassed large complexes of buildings and shops, corrals, nearby fields, pastures, and outlying settlements and chapels. The mission churches were the center of these communities. Designed to concentrate scattered and nomadic populations of indigenous peoples, the Spanish mission system was one part of an aggressive colonization program designed to bring new converts into the church and to counter the losses of the Reformation. Prior to the arrival of the Jesuits, the indigenous peoples of Baja were divided into 5 language groups: the Guaycura near Loreto, the Huchiti near La Paz, the Pericu of the Cape region, the Cochimi in the central peninsula, and the Yuma in the north. Occupying Baja California for over 7,000 years prior to the arrival of the Jesuits, Baja’s native peoples lived in small bands of 50-75 by hunting, fishing, and collecting edible plants. Rough estimates set their total population at approximately 50,000 people across the entire peninsula at the beginning of the colonial period. [3]Early visitors to Baja spoke of the indigenous peoples leading a primitive, nomadic existence, following scarce freshwater sources and native plant harvests. [4] The Jesuits adopted a policy of accommodating their new subjects by learning native languages and translating sermons and prayers into native languages.[5]

The Jesuit policies were initially successful in bringing new converts into the mission system and the population of the missions expanded rapidly. However, the Jesuit’s policies and success in concentrating the scattered bands into central locations would doom their colonial experiment. With no resistance to European diseases, including smallpox, measles, and syphilis, the native people were decimated to near extinction levels, dropping to less than 6,000 in 1800. At the beginning of the 20th century, fewer than 50 individuals with distinctive indigenous traits survived in a single band in the mountains of the northern peninsula. [6] [7] The Baja and California missions were closed after Mexican independence from Spain in the early 19th century. The mission lands and buildings were secularized. The stone churches built by native peoples for native peoples were abandoned.

Created during trips to central Baja in 2007 and 2014, all photographs in the series Churches of Stone were created using Minolta 35mm film cameras: a Minolta X-700 equipped with a 21mm MC Rokkor lens and a Minolta Maxxum 7 equipped with a 24-70mm Minolta lens. Using Ilford HP-5 black and white film, the photographs were developed using David Wood’s DR-5 process, [8] a unique reversal process that converts black and white film negatives into film positives. The film was slightly toned in processing to accentuate the surface details and earth tones. After developing, the film was scanned using a Nikon 9000 film scanner. Final image processing was completed using Lightroom 5 and Photoshop CC.

[1] David Burckhalter, Baja California Missions, In the Footsteps of the Padres (University of Arizona Press, 2013.

2 thoughts on “Churches of Stone”