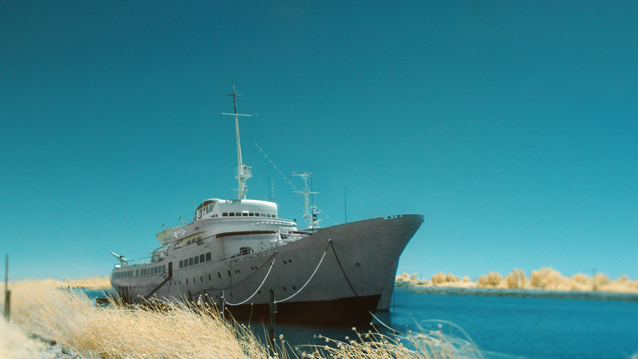 Constructed in 1955, MS Aurora was the first ship wholly made in German shipyards following World War II. MS Aurora began service as a day cruiser named the MV Wappen Von Hamburg, serving the ports of Hamburg, Cuxhaven, Heligoland, and Hornum in the North Sea. Later the ship was sold to new owners who converted the ship into a small cruise liner serving the Greek Islands.[1] Since the 1960s, the MV Aurora has gone through 7 name changes with 9 different owners. The current owner, Chris Wilson, purchased the ship in 2005, in bad repair, and has been working to restore the ship. Since being renamed MS Aurora, the ship has berthed at several locations in the Sacramento and San Joaquin River Delta and in San Francisco Bay. In February 2013, a tug towed MS Aurora from Pier 38 in San Francisco to the ship’s present location at Herman and Helen’s Marina on Little Connection Slough in the San Joaquin Delta, about 10 miles west of Stockton, California.[2][3]

In route to photograph the Venice Ferry, a small cable ferry that crosses the Little Connection Slough, I noticed MS Aurora hugging the top of the levee. Making the turn in front of Herman and Helen’s Marina, I stopped to take a series of photographs of MS Aurora, berthed beside the road. Gleaming in the late afternoon light, MS Aurora dominated the landscape. I photographed MS Aurora with several camera systems but finally settled on using a Lumix G3 converted to infrared capture. I felt that the infrared capture best accentuated the intense visual contrast and the juxtaposition of visual elements which I felt as I approached the ship—the white cruise liner set against the blue sky and empty road was stunning.

I used the Lumix G3 to photograph MS Aurora. The Lumix G3 is equipped with a digital sensor modified to capture the infrared spectrum along with portions of the red spectrum.[5] The Lumix G3, a mirrorless Micro Four Thirds camera system (MFT), features a large sensor size in a very compact body with full manual controls and is equipped with an electronic viewfinder that permits a real-time preview of the infrared spectrum in the viewfinder as well as on the rear screen. To photograph the Aurora, I mounted a Lensbaby Tilt Transformer with a Nikon f/2.8 20mm lens attached to the Lumix G3. The Tilt Transformer is a perspective control adapter made for Micro Four Thirds cameras such as the Lumix G3. Using the Nikon f/2.8 20mm lens with the Lumix G3 sensor effectively doubles the focal length, the 20mm lens becomes a near-normal 40mm lens in 35mm equivalents.

MS Aurora Docked on a Dead End Road is a composite of 9 images, which were later assembled in Adobe Photoshop using “photomerge”
action. Starting at the upper right corner, I captured the scene in a grid pattern, overlapping each section. The scene was first captured with each section in focus, followed by a second set where the lens was titled to optically blur portions of the image.  Composting multiple images permitted me to experiment with creating regions of visual interest in the scene. I’m fascinated with the paradoxes of seeing and in particular the differences between how we view a scene compared with how a camera records a scene. By capturing multiple images with a tilt-shift lens, and once composited in Photoshop, I generated different levels of sharpness in the image, and in much the same manner that we might scan the scene with our eyes. Through my use of multiple images, I experimented with a method to create a dynamic visual experience. In addition, I wanted to call attention to how we generate composite or mental pictures of powerful visual experiences. My working methods in creating MS Aurora Docked on a Dead End Road is suggestive of how seeing is a reconstruction of a scene through information supplied by our eyes rather than a matter of recording light as happens with our sensors or with film capture.

[2] Peter Knego, The History of the Aurora; Lady in a Jam: the Latest in the Aurora Saga.