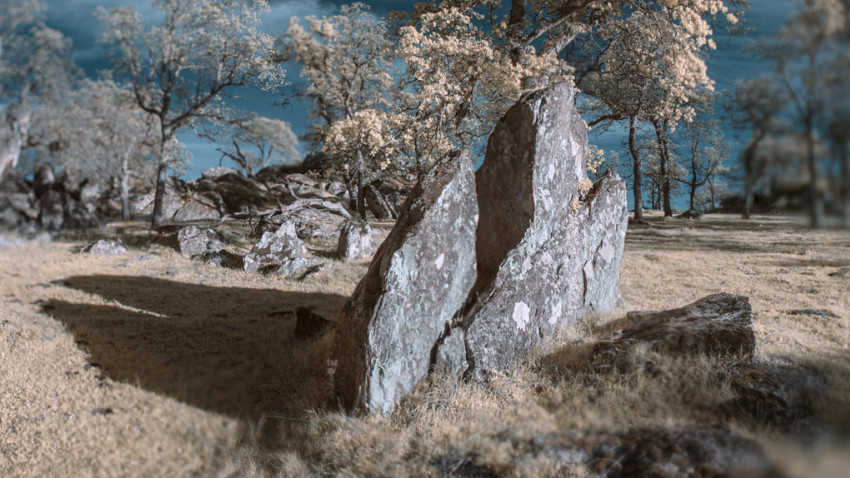 At elevations from 200 to 1200 feet, the Spenceville Wildlife Area in Yuba and Nevada County, California features rolling hills of blue oak and gray pine characteristic of the Sierra Nevada Foothills. Once part of Camp Beale, a massive World War II-era training base, the area features numerous creeks, waterfalls, and from the western extension, stunning views of the Central Valley, the Coast Range, and the Sutter Buttes. Geologically, the Spenceville Wildlife Area is part of the Smartsville Complex formed on the western edge of the North American continent about 160 million years old.[1] The formation of the Smartsville Complex, named after the historic gold mining town of Smartsville, remains an area of active geological research.[2] Most intriguing, geologists suggest an eastern moving island archipelago originating some 600 miles out into the Pacific Ocean rafted into the North American plate and forced into the North American Plate, the island archipelago left a long belt of ocean crust on the North American continental slope which would become the foothills of the Sierra Nevada. [3]

Scattered throughout rolling hills of the Sierra Foothills and found in abundance in the rolling oak woodlands of the Spenceville Wildlife Area are eroded remnants of metamorphosed volcanic rocks. Reminiscent of the megaliths found in Britain and northern France, as “the product of undersea volcanoes of 140 million years ago, now upended and changed by mountain-building forces”[4] the largest schists rise out of the thin soil 20 feet into the air. Given their thin and upright shapes, miners referred to these outcroppings of metamorphosed volcanic rock as tombstones.[5] William Phipps Blake, a geologist who surveyed Gold Rush-era mining operations in the Mother Lode offers one of the first written accounts of the unique rock formations and of the characteristic landscape of the Sierra Foothills:

“On crossing the river [Stanislaus], and rising on the opposite bank, abundance of round, weather-worn masses of basaltic rock were found; they are probably from a dyke or overflow. The old metamorphic or Azoic slates crop out a sort distance beyond. They are talcose and chloritic, and are nearly vertical; standing out in high slabs, arranged in lines like gravestones. They are called grave-stone slates by the miners; and in fact, are the tombstones of the past ages. The road extends nearly at right angles to the trend of these slates, and I traversed a vast thickness. The country is open and undulating, and there are but few trees.”[6]

Beginning in the spring of 2013, I began to photograph grave-stone schists within the Spenceville Wildlife Area, creating large multi-image panoramas with a Panasonic Lumix G-3 micro-thirds camera converted to capture the infra-red spectrum. The Panasonic Lumix G-3 was equipped with a Lens-Baby Tilt-shift adapter mounted to a 20mm Nikon full-frame lens. I focused my explorations along the ridgelines atop the first sets of rolling hills overlooking the Central Valley. Here along the ridgelines and west-facing slopes, I found unobstructed afternoon sun and the largest clusters of grave-stone schists.  I focused on photographing during the spring months from March through early May, before the onset of the hot summer. In early spring the grasses are vibrant green and the faces of gravestone schists are covered in soft mosses and slouches of lichen, which shift in infra-red capture to the gold tones characteristic of late summer. In this undisturbed pasture land, I found stones and trees in an abundance of sizes and shapes and occupying this unique landscape in solitude.

The Lensbaby Tilt-shift adapter encouraged experiments with differential focus and as a means to suggest how our eyes scan a landscape. Equally, my experiments with infra-red capture are suggestive of the search into the region’s unique geological past, and highlighting the continuing fascination with the “tombstones of the past ages” first noted by William Phipps Blake in his geological reconnaissance into the Sierra Foothills in 1853.

[2] Unger presents a good summary of the geological theories concerning the formation of the Smartsville Complex and the Sierra Batholigh: Tanya S. Unger, Mesozoic Plutonism in the central Sierra Nevada Batholith: A review of works on mineralogy and isotopes in relation to models for batholith formation, University of Colorado.

[6]  William Phipps Blake, Report of a geological reconnaissance in California: made in connection with the expedition to survey routes in California, to connect with the surveys of routes for a railroad from the Mississippi river to the Pacific Ocean, under the command of Lieut. R.S. Williamson, Corps Top. Eng’rs, in 1853. United States. Army. Corps of Topographical Engineers, 1858 (p. 254).