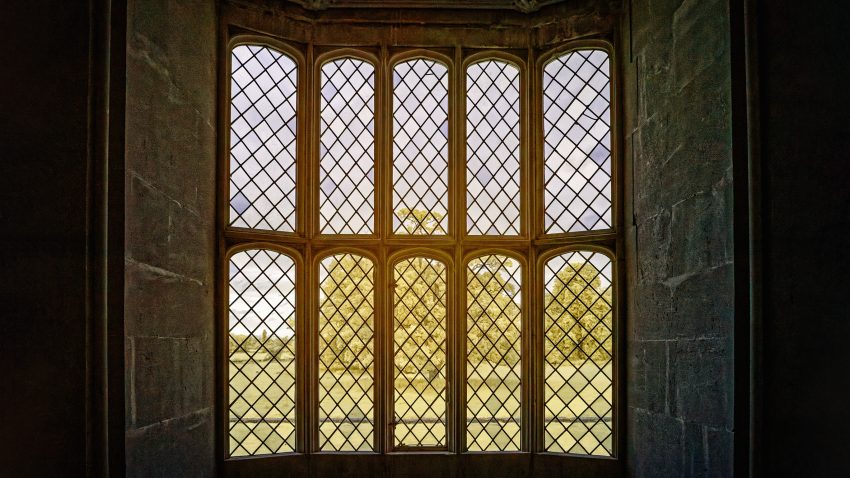 In early June 2022, I toured Lacock Abbey, the large ancestral home of William Henry Fox Talbot, the inventor of the negative-positive photographic process. The highlight of the tour was the opportunity to look through the latticed window in the south gallery of Lacock Abbey, the subject of one of the world’s first camera-generated photographs. Later, I walked through the grounds surrounding Lacock Abbey and took photographs of the pasture land, pond, paths, and enormous trees that grace this national historic property. I photographed the grounds and the abbey with a camera converted to a full-spectrum/infrared recording, capturing part of the light spectrum that we can not see. My choice of camera mirrored Talbot’s deep interest in spectral analysis and the properties of light. Please enjoy the short video At Lacock Abbey (above), the series of infrared photographs created at Lacock Abbey, and the article on Willliam Henry Fox Talbot’s remarkable invention.

In the Photogenic or Sciagraphic process if the paper is transparent the first drawing may serve as an object to produce a second drawing, in which the lights and shadows would be reversed.
—William Henry Fox Talbot, from Notebook ‘M’[i]

Experimentation, the blending of unlikely materials to produce new processes and new photographic devices is a permanent feature in photography’s short history. Starting in 1834, William Henry Fox Talbot, an avid experimenter with light and chemistry, laid botanical specimens onto paper soaked in a solution of sodium chloride followed by a solution of silver nitrate.  He then exposed his semi-transparent specimens and the paper to bright sunlight. When Talbot removed the specimens, ghostly impressions remained on the paper.  (These unique objects are today referred to as “photograms.”)

If an object, as a flower, be strongly illuminated, & formed in a camera obscura, perhaps a drawing might be effected of it, in which case not its outline merely would be obtained, but other details of it. —William Henry Fox Talbot, from Notebook ‘M’[2]

In 1835 Talbot inserted the sensitized paper into a custom-made camera to create the first camera-generated negative. Talbot named these experiments “photogenic drawings,” and inexplicably waited until Louis Daguerre announced his daguerreotype process before he released news of his early experiments with photosensitive materials. He quickly organized an exhibition of his first results with his photographic process in London. In 1839, Talbot was the first to experiment with silver bromide, a much faster emulsion. Talbot’s paper-based process and other innovations he introduced formed the core of photography before the widespread adoption of digital processes in the late 1990s.

Talbot, by all accounts, was stunned by the announcement of Louis Daguerre’s daguerreotype process in 1839. Talbot had been experimenting on and off with photochemical materials beginning in 1834 and perhaps earlier. As a botanist, Talbot felt that photography offered convenient methods for generating accurate records of botanical specimens. By 1835 he made his first written descriptions of paper sensitized with silver salts. In the summer of 1835, he made a number of what he called “photogenic drawings,” contact prints of objects laid on silver sensitized papers, and as he said, “succeeded in fixing images in a solar microscope by means of a particularly sensitive paper there appeared no longer any doubt that an analogous process would succeed in copying objects of external nature…” [4] He then constructed a series of small box cameras making at least three small paper negatives of the light streaming through the oriel windows of Lacock Abbey. These results are believed to be the first camera-generated negatives in the history of photography.

Talbot’s experiments lead to the discovery that negative images could be pressed face down, emulsion side to emulsion side, against a second sensitized sheet of paper. By shining light through the back of the negative, a positive image is created. This discovery is the beginning of the negative-positive system of modern photography. Talbot sensitized a sheet of writing paper by first dipping it into a mixture of salt and water, then once it was dry brushed the sheet with a solution of silver nitrate. Repeated brushing and alternate baths of salt water and silver nitrate, Talbot found increased the paper’s sensitivity, enough he said, “for receiving the images of the camera obscura.” [5] After observing that sensitivity was nearly eliminated in areas of the paper where the salt was most concentrated, Talbot then dipped the entire sheet of exposed paper into a “strong solution of common salt”. [6] Inexplicably, between 1836 and 1838, Talbot suspended all work on his photographic experiments, publishing instead several theoretical studies.

Following the first announcement of the Daguerre process, in January 1839, Talbot immediately wrote Arago to inform him that he intended “to submit a formal claim of priority to the French Academy.” [7] While Daguerre was enjoying the acclaim of his invention, Talbot struggled to gain recognition for his own photographic experiments. Talbot found little support in the French Academy or within his own scientific community for his claim, still, he organized a hasty presentation to the Royal Society in London, which included an exhibition of a set of photogenic drawings from 1834-1835 at the Royal Institute, and later delivered a paper to the Royal Society which announced his invention, “Some Account of the Art of Photogenic Drawing, or the Process by Which Natural Objects May Be Made to Delineate Themselves without the Aid of the Artist’s Pencil.”

A latent image is an invisible image produced by the exposure of focused light onto photosensitive silver materials. Prior to the discovery of the latent image, Talbot “printed out” his calotypes by exposing them to bright sunlight. Talbot’s introduction of a chemical developing agent revolutionized photography. This complex chemical reaction is believed to involve small specks of silver atoms acted upon by the developer, which reduces the whole silver halide crystal to silver and makes the image visible as a negative. Talbot’s discovery came by chance, following an eighteen-month period of intense experimentation.

The sting of Daguerre’s announcement appears to have intensified Talbot’s experiments with his process. Over an eighteen-month period, Talbot renewed his photographic experiments with the intention of improving the speed and image fidelity of his process. This intensified work resulted in the discovery in the fall of 1840 of the development of a latent negative image, “acting on the suggestion made by his friend [John] Reade made the all-important discovery that sheets of photogenic drawing paper which had been given a brief exposure, insufficient to produce a visible image, possessed a latent image. By using a solution of gallic acid he developed this into a visible one.” [8]

Talbot’s discovery of the latent negative image would shape the fundamental characteristics of photography until the advent of the digital process in the late 20th century. Talbot brushed a sheet of paper with potassium iodide and silver nitrate to produce a bright yellow coating of silver iodide. These papers were insensitive to light and had the added advantage of being prepared months in advance. Prior to making the camera negative, the iodized paper was brushed with a solution of silver nitrate, acetic and gallic acids and then inserted, still moist into the camera. Exposure times varied from a few seconds to a minute or two. Talbot named the new process “calotype” or beautiful print. When details of Daguerre’s process were revealed in 1839 it was apparent that Talbot’s processes were substantially different, nevertheless, he felt pressured by Daguerre’s patent in Great Britain, and patented his calotype process in February 1841. This decision to patent his process was controversial and is believed, along with the high fees he charged, to have retarded the adoption of the calotype process in the coming decade.

At this time, the daguerreotype, which was a unique image that could not be reproduced except by taking another daguerreotype photograph of the original daguerreotype enjoyed enormous popularity due to its crisp detail and the holographic-like display of the image on the polished plate.  The initial calotype images on paper appeared much softer and were not considered realistic enough to satisfy the general public or scientific community. John Herschel, an English astronomer, mathematician, experimental photographer, and close friend of Talbot termed Talbot’s experiments as “child’s play in comparison” with the daguerreotype. [9] Until 1839, the public had only experienced images through the agency of the artist’s hand, or in engravings on paper. In these cases, the paper or canvas support was part of the visual experience. Paintings were rarely exhibited in public and magazines and newspapers overflowing with imagery would not appear until the early 20th century. The calotype, with its paper support, suffered in comparison to the highly polished metal surface and the seamless totality of the daguerreotype. [10] Talbot found that he could increase image details by waxing the paper negative after processing, thus making it more translucent, still, the early calotype was no match for the daguerreotype for details. The overall effect of the calotype suggested a more naturalistic, and illustrative depiction that would be increasingly favored in the coming decades.

The promise of Talbot’s negative-positive process, and its principal advantage over the daguerreotype, was the printing and distribution of editions of photographic prints, which Talbot’s The Pencil of Nature illustrates. To encourage the mass production of paper photographs, in early 1844, Talbot supported Nicolas Henneman, his former valet, in establishing the first commercial photographic printing firm, in Reading, England, about 40 miles west of London. Talbot established a photographic printing studio to enable him to make large quantities of photographs on fine writing paper, called salt prints, required for his book, The Pencil of Nature. The book was illustrated with 24 salt prints demonstrating the new graphic potential of photography.  About 200 copies of this book were produced, with the salt prints tipped into each copy by hand.

Early on, Talbot recognized a continuing problem for photography, image permanence. In an effort to make photographs that would not fade over time, Talbot aggressively pursued photogravure, contributing two new developments to the process. Talbot’s continued work with light-sensitive materials laid the foundation for photogravure printing technology and what was to become the Talbot-Klic process. By the late 1880s, the Talbot-Klic’s gravure process was often used to illustrate high-quality books with photographs—a process technically and artistically far superior to previous methods. For Talbot, photogravure had been the logical evolution of his original invention of photography

Talbot continued to refine his process and extend the reach of photography. He suggested and continued to experiment with many of the features common to contemporary photography including: