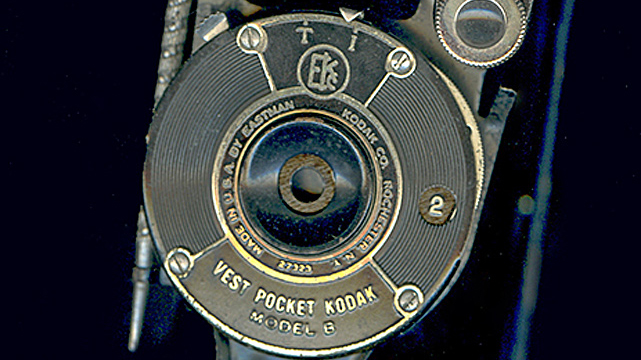 By introducing a camera that could be taken anywhere, and used by anyone, George Eastman revolutionized photography.

I recently discovered a Vest Pocket Kodak Model B,  a very popular Kodak camera manufactured from 1925-1934 [1], and began to explore experimental options with this beautifully designed camera. Touted by Kodak’s marketing as “You Don’t Carry the Camera, You Wear It”, the Vest Pocket Kodaks were produced from 1912-1934 and sold for as little $7 dollars. The Vest Pocket Kodak was “always ready for the unexpected that is sure to happen.” [2] Designed for use with 127mm roll film, and producing a 4 x 6.5cm negative, the Vest Pocket Model B series featured a simple “Kodak Droblet” lens[3] with a rotary shutter and rotary aperture with four settings. Autographic Vest Pocket Kodak was supplied with a stylus, similar to those found on smartphones, which allowed the user to etch notes onto the paperback of the 127mm.[4] The Vest Pocket Brownie Model B is folded up small enough to fit into a pocket and is a little over an inch thick when folded. [5] Like all folding Kodaks, the camera contains a bellows unit, which in the case of the Vest Pocket Model B completely detaches from the film holder. The detachable lens bellows permits interchanging with contemporary camera bodies. Once the bellows unit is detached from the film bed, the Brownie’s lens can be fitted over the lens opening of any interchangeable digital camera body, and simply held in place with your hand to take photographs with this 88-year-old lens. [6]

The Vest Pocket Brownie bellows unit moves on a track, which guides the lens into the film bed when folded. When detached from the film bed, moving the lens on its track permits focusing of the lens when attached to a digital camera body. The shutter features two settings: “I” for instant or between 1/25th and 1/50th of a second and “T” for timed exposures. Placing the shutter on “T” means the shutter will remain open until manually closed.

1. Remove the lens from the digital body.

2. Set the Vest Pocket lens to “T”; trip the shutter;
turn the rotary aperture ring set the adjust the depth of field

3. Next set the Vest Pocket lens/bellows over the opening for the lens.

4. Set the digital camera on manual and take your first exposure.

5. Depending on your camera model, you may need
to set your digital camera shutter to fire without a lens attached.

6. Use the LCD readout to adjust your shutter speed up or down to dial in your exposure.

[6]127mm roll film is still available from Freestyle Photo.biz and from other suppliers including B & H Photo. 35mm roll film cassettes must be modified to work in the Vest Pocket Brownie.