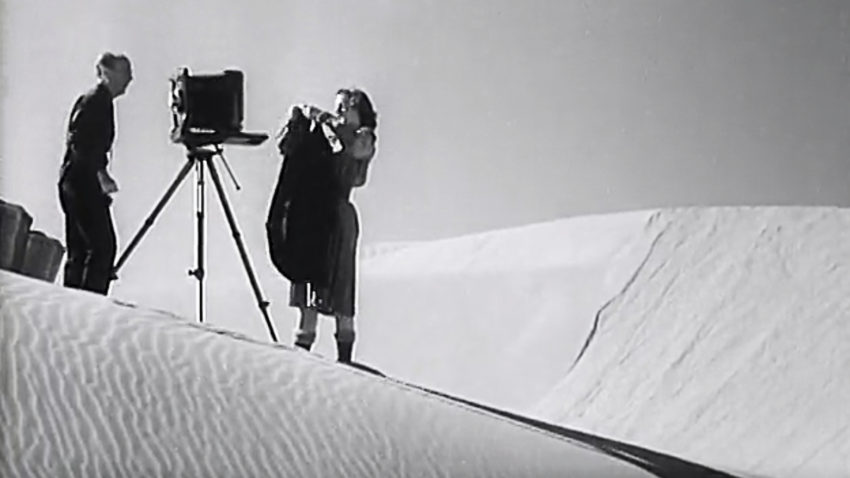 Edward Weston — The Thing Itself

Photography in the decades just after the First World War joined modernist innovations underway in architecture, painting, sculpture, and literature. Modernist photography embraced an aesthetic of simplification, stripping away ornamentation to reveal the texture of paint or stone, to expose the steel structures of buildings, and distilling form to reveal the new unity of modern life.

Modernist approaches coalesced in the San Francisco Bay Area in the early 1930s around the Group F/64 photographers with Edward Weston as the patriarch. Better known as the straight photography movement, no single movement of New Vision photography is as well known as the F/64 Group. The name was taken from the smallest aperture on the lenses used by the F/64 photographers. No term has been more misunderstood or misrepresented as “F/64”, nevertheless, the name stuck. [1] Carried forward by the first comprehensive history of photography written by Beaumont Newhall for the Museum of Modern Art in New York in the late 1930s, the Group F/64 straight photography aesthetic has remained dominant in photography and continues to provide the baseline definition of a fine art photograph to the present day.

For photographers, this new aesthetic meant releasing the full measure of detail from large contacted printed negatives onto the glossy surface of silver gelatin paper and looking deeply into the object before the lens. Beginning in the years before and immediately after World War I, these loosely connected photographers came to similar understandings, as described by Paul Strand, in “the absolute unqualified objectivity” [2] of the photograph. Their efforts moved photographic depictions away from the conventions and themes of Pictorialist photography, then the dominant mode of photographic representation. The desire to accurately depict a subject, to show the thing itself has driven photographic invention and innovation since the daguerreotype, and as an aesthetic discourse, this same argument has been joined at many times in the history of the medium, notably by the P. H. Emerson and the Linked Ring in the early 1890s. What was different this time, was the passionate embrace of the machine aesthetic, and a conviction that the intense optical details, the properties particular to photography, best expressed the new age unfolding.

“The photographer’s most important and likewise most difficult task is not learning to manage his camera, or to develop, or to print. It is learning to see photographically—that is, learning to see his subject matter in terms of the capacities of his tools and processes, so that he can instantaneously translate the elements and values in a scene before him into the photograph he wants to make.” —Edward Weston [3]

During the 19th century, photographers depicted subject matter through normal vision—proportions and perspectives presented the world as humans might view the subject standing before it. Modernist photographers closed the distance to the subject. By moving in, they clearly announced a new vision — a vision that separated the thing photographed from its surroundings.

Edward Weston, a California portrait photographer, had his Pictorial photographs honored by-election to the London Salon of Photography, the successor to the Linked Ring, the preeminent Pictorialist association. Weston continued to work with pictorialist motifs until 1923. After seeing early modernist paintings at the Pan Pacific Exhibition in San Francisco in 1915, and a later exhibition in Los Angeles, he began to work with abstraction and realistic depiction. In 1922, Weston traveled to New York, and on his way across the country made industrial photographs of the ARMCO Steelworks in Ohio. These photographs represented a turning point for him. While in New York, he met with Alfred Stieglitz, the leading light of American photography, who was engaged in a reevaluation of his own work and like Weston, his personal life. Weston took away from the meeting the key concept that would carry forward for several decades of photography: “a maximum (amount) of detail with a maximum of simplification—with these words as a basis for his attitude towards photography—Alfred Stieglitz—talked to Jo and me for four hours—rather he talked to us…Brilliantly—convincingly.” [4] While in New York, Weston also met with Paul Strand and Charles Sheeler, the two most accomplished Modernist photographers in America at that time.

Weston wrote in his diaries, The Daybooks that “the camera should be used for recording life, for rendering the very substance and quintessence of the thing itself, whether it be polished steel or palpitating flesh…”[5] By the 1930s Weston’s photographs and ideas about photography would embody the new objectivist aesthetic. Like Strand, Weston concentrated on photographing objects of the everyday with extreme precision in order to reveal their transcendent form and complexity and to allow “seeing” deeply into all things.

In 1943, Edward Weston wrote Seeing Photographically, which continues to be influential. Echoing Newhall, Weston speaks to those properties that are unique to photography and helped set the critical foundation for straight photography. Weston’s ideas have been a springboard for many commentators, including Susan Sontag who asserts that photography has changed how we see and has altered the experience and practice of human memory; before photography, seeing was regarded as only one sense among the other four. The power of the photograph and its extensive reach into all aspects of culture not only changed what was seeable but also nurtured the idea of seeing for its own sake—a notion that has motivated all modernist art movements. [6]

Paul Strand, the preeminent modernist photographer stated this idea most succinctly and passionately by stating “Photography finds its raison d’être, like all media, is a complete uniqueness of means. This is an absolute unqualified objectivity. Unlike the other arts, which are really anti photographic, this objectivity is of the very essence of photography, its contribution, and at the same time its limitation. The full potential power of every medium is dependent on the purity of its use.”[7] Weston and other objectivist photographers “supplied the inner eye necessary to perceive this innermost essence of things.”[8]

Weston scorned the artifice of the Pictorialists, and denounced Pictorialist methods as not photographic. Nevertheless, Weston’s great photographs, his vegetables, and nudes, were entirely posed, photographed under controlled studio conditions and contact printed to enhance the details of his lens. Weston’s expression was rendered through the machined lens, camera, standardized and manufactured film, and glossy paper. Instead of the artifice of the hand, Weston championed the artifice of the camera and lens which “sees too clearly to be used successfully for recording the superficial aspects of a subject. It searches out the actor behind the make-up and exposes the contrived, the trivial, the artificial, for what they really are.”[9] Weston’s artifice moved beyond scientific documentation and offered instead a recreation of the thing before the lens, a “heightened sense of reality—a kind of super-realism the reveals the vital essence of things” [10] on the glossy surface of the photographic print.

In his journals and other writings, Weston railed against theories of art: “I have always held that there is too much talk about art—not enough work.” He told his good friend, Ansel Adams, “I never try to limit myself by theories,” [11] In his introduction to his solo show in New York in 1932, Weston protested that “Too often theories crystallize into academic dullness—bind one in a straitjacket of logic—of common sense, very common sense.” [12] Philosophizing frustrated him, still, he continually sought to make fine distinctions between “interpretation”—a response, which called forth symbolic associations, and “presentation” —a word that more closely matched his desires to record the quintessence of the object.[12]

Weston fervently believed in photography as a means of personal expression, and his great photographs provided fine art photography with a fresh start, and proved perhaps his own point, that art can move past flawed logic. For Weston, the point of photographic art was to intensify form and texture, and if his photographs became so intense as to suggest super-realism, a reality outside of the thing itself, he felt that he was not making the thing look different from itself.

Weston and the Oceano Dunes

The Oceano Dunes once served as a substitute for the Sahara Desert in Cecile B Demille’s silent film classic the Ten Commandants which was filmed here in 1923. The dunes were also home to an artist colony—a loose collection of writers, poets, hobos, and others riding out the economic devastation of the Great Depression known as the Dunites.

In the early 1930’s Edward Weston’s sons Chandler and Bret Weston were the first photographers to creatively explore the Oceano Dunes. Likely introduced to the area by his sons, Edward Weston made his first photographs in this area in 1934 and he returned again in 1936 and 1939 to produce his most celebrated landscape photographs. He returned again in 1948 to film footage for The Photographer, a documentary film by Weston’s former assistant and close friend Willard Van Dyke. [13]

The dunes have been very popular with landscape photographers and most notably the Group F/64 photographers Imogen Cunningham, Willard Van Dyke, Bret Weston, Ansel Adams, and Edward Weston who made numerous retreats to this area, typically staying at the Dunite colony. Each of the Westons, Van Dyke, and Adams contributed cover art for the Dunites’ short-lived literary magazine, the Dune Forum.

Edward Weston produced his greatest landscape photographs in the Oceano Dunes. As a photographer, he focused on objects of the everyday with extreme precision in order to reveal their transcendent form and complexity and to allow seeing deeply into all things and providing a transcendence from the particulars and thereby moving the viewer from grains of sand to the universe.  Sand was emblematic for Weston.  The Oceano Dunes, a landscape of sand provided his ideal landscape, one that he said was made for him.

As photography historian Graham Clark notes, for Weston “every detail is of significance, for it reflects a universal condition.” [14] Weston reveals in the physicality of forms and patterns of the sand dunes a larger spiritual and mysterious presence. Weston believed that “the physical quality of things can be rendered with utmost exactness: stone is hard, bark is rough, flesh is alive, or they can be made harder, rougher, or more alive if desired”. [15] His intention was to use his technical and compositional virtuosity and the mimetic powers of photography to reveal not just realism, but super-realism. Weston’s radishes, peppers, toilets, artichokes, nudes, and sand dunes were taken out of their normal context so as to reveal the invisible details of structure and surface to surpass our unaided vision of real things.

Weston believed that the intensity of vision revealed not the external shape, but the quintessence and an inner eye to perceive the innermost essence of things. Weston wrote in Daybooks, 1930, “The intuitive understanding and recognition…must be confirmed to a form within which it can burn with a focused intensity.”[16]

For Weston perception of the primal forms illuminated the secret principles by which nature functions. In the Oceano Dunes, Weston found his primal forms.

[1] Commonly referred to as the “sharpest” aperture on a “camera”, F/64 may or may not be the sharpest or smallest aperture on a lens. The lens aperture is only one of many factors that determine the sharpness of the final print. The focal length of the lens, the subject to camera distance, and the film size also influence the depth of field or acceptable sharpness of the photograph. With most lens designs, the smallest aperture is usually not the “sharpest” aperture.