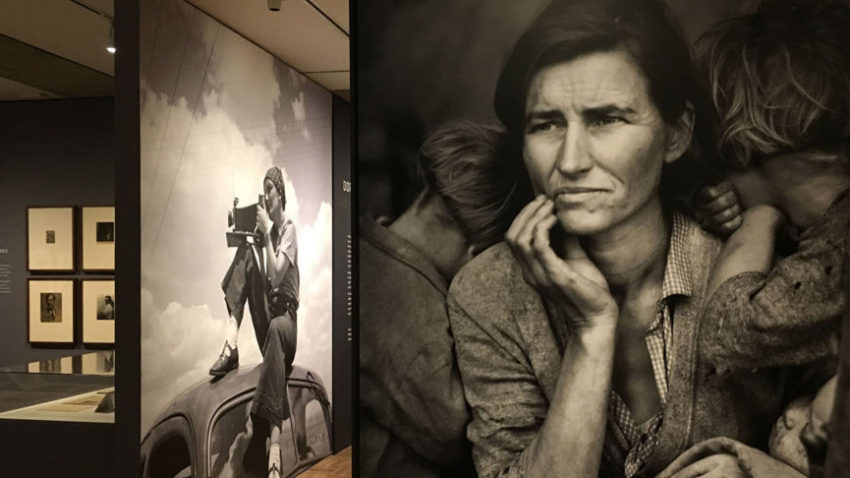 The term documentary is of relatively recent origin, first appearing about 1900, and was loosely used by film critic John Grierson in 1926. This term is now applied to a particular response in photography and film to the cultural upheavals following World War I and into the present day. [1] Illustrating our abilities to rewrite history, we extend the term now, backward into periods of history where the term was not in common use. Documentary, of course, stems from the term document, (originally from the Latin): “a piece of written, printed, or electronic matter that provides information or evidence or that serves as an official record.” [2] The invention of half-tone printing technology permitted for the first time the widespread publication of photographic images, producing simultaneously photojournalism—the use of photography by journalists, and the use of photography to influence social reform.

Social documentary is intended to produce social change. Unquestionably, significant photographic work from the documentary approach continues to define the medium. The photograph’s link to evidence and official records are vital to understanding the challenges and the power of this approach in photography. Photography played a central role during the 19th century in the emergence of a network of new social institutions that responded to rapid social change and cultural instability. The status of the photograph as evidence and official record grew out of complex social negotiations involving its use in legal practice, the sciences, and the expanding role of the photograph in the arts and art history.

The social documentary genre sprang from expanding cultural dynamics in the late 19th century, driven to a large degree by photography. Social documentary photographs were effective initially because of the newness of the genre. Magazines were just beginning to include photographs, and image saturation was not yet a factor. Social reform movements and later, governments effectively used photography to serve social reform and political ends, a trend that expanded greatly during the political upheavals of the First World War.

The boom years of the 1920s interrupted the momentum of the American social documentary movement. Following the market crash of 1929, urban unemployment, the result of bank failures and plant closing in the wake of tightened credit spiraled, and in rural areas, agricultural failures accelerated by drought and destructive land-use practices led to a dramatic increase in poverty. Huge waves of migrants, derogatorily described as Okies traveled by car and by trains to areas that promised work and fertile land, especially California’s central and coastal valleys where agricultural work was available year-round. As part of President Franklin Delano Roosevelt’s New Deal, the United States government provided resettlement loans to farmers and work programs for the unemployed to help people get a fresh start.

The federal government also sponsored projects to document through photographs the plight of the migrants and the government’s efforts to help them. The Historic Section of the Resettlement Administration later called the Farm Security Administration (FSA), was the most successful of these projects. The FSA not only provided documentation of the government’s efforts to provide relief and resources, but it also provided work for a substantial number of photographers, including Walker Evans, Dorothea Lange, Russell Lee, Arthur Rothstein, Ben Shahn, Jack Delano, Marion Post Wolcott, Gordon Parks, John Vachon, and Carl Mydans. Between 1935 and 1943, these photographers traveled throughout the United States and created one of the most extensive photographic records in the history of the medium. During the 8 years of the project, more than 270,000 photographs were taken, including thousands of color photographs, one of the largest documentary uses of early color photographic materials. Over 100,000 images are now housed in the Prints and Photographic Division of the Library of Congress. This visual record of the United States, at an important transitional moment in the nation’s history, has come to exemplify the Depression through the widespread use of photographs from this project in history textbooks and publications from the period. FSA photographs were included in exhibits, published in books and widely seen in large glossy magazines of the era including Life, Look, US Camera, and numerous regional and national newspapers.

The FSA project was like no other social documentary project, an elephant in the room of photography with an enormous reach that touches every genre in the medium. The success of the project would come to define documentary photography in the same way that Ansel Adams’ landscapes of Yosemite define the wilderness for most Americans. Roy Stryker, a former economics professor at Columbia University, was the Director of the FSA. He hired photographers who provided unique perspectives, superb technical skills, and the ability to convey emotion through their images. Stryker was accused of being a propagandist and exercising too much control over the work of his photographers. FSA photographers worked from scripts prepared by Stryker that described the kind of images he wanted. FSA photographers did not own their negatives, and rights for their work fell immediately into the public domain. After submitting their photographs, they had no control over how their images would be printed, cropped, or captioned when published, still, the work they did for FSA would define their photographic careers.

By design, FSA portraits became types. “Subjects photographed, like citizens interviewed, remained anonymous.  Stripped of their identities, they became the common men and women whose plight the Roosevelt administration was working to improve.” [3] As critic John Tagge notes, FSA photographs claimed to “’ put the facts’ directly and vicariously, through the report of ‘first-hand experience’, the discourse of documentary constituted a complex strategic response to a particular moment in crises in Western Europe and the USA…of representation itself: the means of making the sense we call social experience.”[4] FSA photographers were instructed to follow current social science techniques in captioning their images. Trained in the heightened visual environment of new vision graphics, they employed innovative Modernist visual strategies and presented their subjects as “ordinary citizens temporarily down on their luck.

Before the Depression, Dorothea Lange worked as a portrait photographer based in San Francisco. Observing the breadlines that formed outside of her studio, she soon began to photograph the plight of the unemployed and disposed. Originally trained in the Pictorialist style, she is one of the many graduates of the Clarence White School of Photography to leave their mark on the history of the medium. Her photographs reflected her ability to convey compassion through the use of gestures and expressions. Her portrait style reflects a keen awareness of body language through the placement of hands.[5] Lange favored the large Graflex single-lens reflex camera, even so, she was able to quickly respond to close and chance encounters to record richly enduring images. [6] Although Stryker appreciated Lange’s vision, the two disagreed over the printing of her work. Lange preferred to print her own photographs, and supply her own captions, rather than turn her film over to the FSA.

Migrant Mother demonstrates Lange’s intense focus and determination. Writing about the photograph she said, “I was following instinct, not reason; I drove into that wet soggy camp and parked my car like a homing pigeon” [7] making an immediate emotional connection with her subjects. Lange’s image quickly became an icon of the depression era and continues to hold symbolic power over 80 after it was first taken. Discussing the power of photographs such as Migrant Mother to summarize complex social phenomena, and overtime to operate as icons, cultural critic Vicki Goldberg notes that “photographs easily acquire symbolic significance, they are not merely symbolic, they do not merely allude to something outside of themselves—as a red cross does, or a hammer and sickle—for photographs intensely and specifically represent their subjects.”[8]

Stopping her car, at a pea picker’s camp outside of Nipomo, a small farming community on California’s Central Coast, following a month-long photographic expedition documenting migrant camps, Lange remembered spending only 10 minutes the ramshackle camp and took only 5 exposures.[9] Lange’s ability to concentrate and control the visual message is apparent in the examination of the series she captured at the camp.  In the photograph that would be known as “Migrant Mother,” Lange closely crops the children, focusing on the mother to establish an immediacy and connects the photograph to the lengthy history of Madonna and Child, an image that resonates throughout Western art and culture. “Lange did not arrive at this final composition by accident, but by patient experimentation with various poses. The images in the series comment on each other and represent a logical progression and development of subject matter.” [10] It is interesting to note, that in Migrant Mother, Lange includes only 3 children, the number of children viewed as appropriate for cultural norms in 1930. Showing all of Thompson’s 7 children would have shifted the blame for family’s condition to mother, rather than to external conditions. The children, one nursing and in the mother’s lap and the other two children looking away from the camera, effectively link the photograph to themes of renewal and regeneration. Lange centers the image within the intimacies of family popular in the Depression era, a theme seen repeatedly in her photographs of mothers and children. The position of the mother’s hand pressing into her and her expression face opens the photograph into the long tradition of Mother and Child images. As the historian Ian Jeffery explains, “In Soviet icons of the early 1930s the distant look meant utopia was achieved. In the Christian tradition it meant that the Mother foresaw, in terrible detail, the destiny of her Child.”[11] Originally captioned “Migrant agricultural worker’s family. Seven hungry children and their mother aged 32. The father is a native Californian,” [12] the mother was later identified as Florence Owen Thompson. Highlighting father’s absence within the caption, and the fact that he is a native to the state and not a recent migrant from Great Plains heightens the pathos and the desperate plight of the family.

Lange immediately gave the image to the San Francisco News and told the editor that the pea pickers were starving. Within days, food was rushed to the farm colony. Lange was not mentioned nor was the mother identified in the original publication. Migrant Mother became an instant classic, widely exhibited in museums, first at the Museum of Modern Art in 1941, and included in countless books and publications. Her work continues to attract large crowds to museum exhibitions across the globe.

After her work with F.S.A, Lange continued her work with documentary photography, creating a moving record of racial hatred and discrimination for the War Relocation Authority (WRA) documenting the internment of Japanese Americans during World War II.

[8] The exact number of photographs Lange captured at the Nipomo pea-picker site is in question, as well as the order of the Migrant Mother series. Lange stated in an article in Popular Photography, 1960 that she took 5 exposures. Other sources count 6 and 7 exposures. The Oakland Museum has 6 exposure from the Nipomo site in their collection with two exposures showing the family in their tent, one with a child crying and a second with the child looking deadpan at the camera.