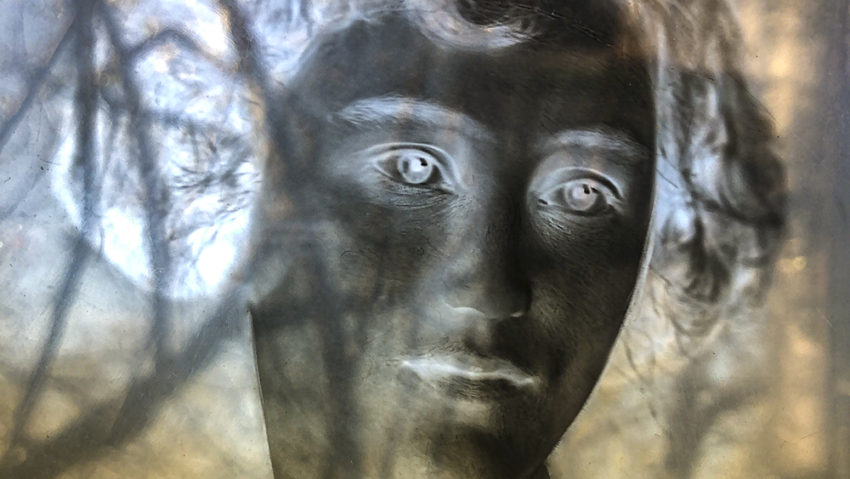 It’s my guess that portraits belonged to a professional studio photographer and the negatives were sold in an estate sale. It’s my guess too, that the photographer specialized in portraits of families with portraits of mothers and children a speciality, for included with the set of portraits of these beautiful middle aged women are portraits of young children posed in their Sunday best clothes. The portraits are expertly posed and lighted and the detail in the 5×8 inch silver gelatin dry plates are exquisite.

It’s spring now and outside the fruit trees are blossoming. On a recently morning, I took the silver gelatin glass plates and held them up to blossoming tree and watched the soft morning light fill the silver negatives with color and light. I tried photographing the play of light and color and branches coming through the negatives with several different cameras and lens combinations, but I settled on using my iPhone. I found that I needed to move the glass to remove reflections and the iPhone was the easiest camera to manage this operation. I found as well that the close up feature on the iPhone designed to photograph documents did the best job with capturing the light and color penetrating and bringing to life the vintage portraits in glass.

On Silver Gelatin Glass Plate: With the invention of the wet collodion glass plate process in 1851, each photographer operated as their own handicraft producer of photosensitive materials. In the hands of the highly skilled, the wet collodion process produced remarkable results, however the shortcomings of wet materials in the field were obvious and encouraged continual improvements to the process. Additionally the narrow dynamic range of the wet collodion process limited scientific and landscape photography. Soon after the introduction of the wet-plate process, dry collodion plates were marketed. [1]  These plates required nearly 6 times the exposure of the wet plates and were not widely used. The major breakthrough with glass plate technology occurred when Richard Leach Maddox substituted gelatin for collodion as a binder of silver on glass. Gelatin is a translucent substance derived from the animal collagen and quickly became a substitute for collodion. Silver salts suspended in gelatin coated first dry plates, then paper and film. Silver gelatin film and prints, the mainstay black and white darkrooms since their introduction, remain in widespread use to this day.

Maddox, an amateur photographer and physician, published his formula for silver gelatin plates in the British Journal of Photography, and left it to others to refine the new process. Never patenting his process, improvements quickly lead to the manufacture of commercial dry plates in 1878. These plates were prepared with silver bromide emulsion, which greatly increasing the sensitivity and speed of photography, with exposure times, for the first time, into fractions of a second. Dry plates remained sensitive for months, and allowed fieldwork without a portable darkroom. By the late 1870’s several companies in Europe and America marketed dry plates, which could be purchased from numerous photographic supply stores.

Gelatin dry plates lead to increased standardization of equipment, formats, and camera designs and were widely used by professional photographers. Conversely, dry plates stimulated greater experimentation at all levels of photography and as the photography historian and curator John Szarkowski notes dry plates “encouraged the photographer to take chances, to risk a half-dozen poor negatives for the sake of unpredictably good one.”[4] The introduction of highly sensitive dry plate emulsions made possible the revolutionary investigation of motion studies throughout the 1880’s, and the scientific advances with astrophotography and later x-rays which were first captured on dry plates. Gelatin dry plates continued to be used in scientific photography until the 1970’s. Although fragile, the dry plates provided a reliable and rigid support, and were popular with photographers well into the 1930’s. For example, Ansel Adam’s famous Monolith, the Face of Half Dome, 1927 was created with a panchromatic silver gelatin dry plate.

2 thoughts on “Negative Portraits In Silver”