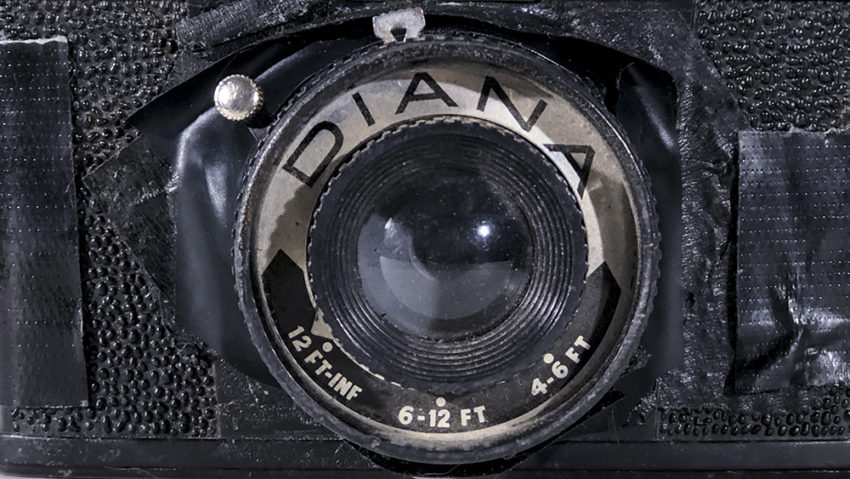 Diana cameras were manufactured by the Great Wall Plastic Company in Kowloon, China during the 1960s and 1970s and imported by the Power Sales Company of Willow Grove, Pa. Originally, the importer sold the Diana only in case lots. Cheaply manufactured and selling for prices as low as 50 cents to high of $3.00, [1] the Diana became popular as an education tools in beginning photography courses, and following a series of fine art exhibitions in the 1980’s, the Diana camera took on legend status. Production of the Diana was discontinued in the 1970’s.

The original Diana camera was sold under many names including “Banner”, “Leader” and “Debonair”. Holga camera were introduced in 1982 from a factory in Kowloon, Hong Kong, in the same area of Hong Kong where the Diana was born. The Holga took the place of the Dianas as a low-tech educational tools. Millions of Holgas were sold before the camera line was discontinued in 2015. Following upon the  popularity of the Holga,  Diana+ introduced sold by Lomography.com.

In 1986, while scouring a thrift store in Boise, Idaho for photographic props, I found my first Diana camera. I paid 50 cents for the camera that would become an important component of my photographic language. In June, 2018, I packed my Diana camera and one roll of Ilford 120mm black and white film into my camera bag for a trip to China and Hong Kong.  In part, I used the Diana camera to photograph in Hong Kong, first at the official border crossing from Shenzhen, China into the Hong Kong, and then on main highway bridge leading into Hong Kong. The remainder of the roll was exposed in Kowloon and on Hong Kong Island at several tourist stops.  In total, I created 9 useable images shown below, a good ratio for the unpredictable Diana camera.

Eerie, dreamy, haunting, strange, evoking a sense of nostalgia and creating a quality of memory are descriptions of the photographic effects of the Diana cameras. And others too: evasive, inherently expressive, romantic, a nineteenth-century look. Having only a bulb/instant shutter setting, crude apertures and an inexact front-twisting focus knob, these cameras are often spoken of as a reaction against the increasingly complex program or technology of photography. The photographic effects of the Diana, Robert Hirsch points out “questions many photographic axioms, such as a photograph must be sharp, a photograph must have maximum detail, and a photograph must possess a complete range of tones to be considered good.” Hirsch also asserts, “cameras define and shape an image, which make them a basic component of the photographic language. To limit the choice of the cameras is to reduce what one can photographically express. Building these rudimentary devices can acquaint beginners with how a camera functions and remind seasoned workers to concentrate on the subject of their image making rather than technology.” [2] Hirsch stress that plastic cameras challenges the photographer to see beyond the equipment and into the image,”[3]the elimination of “mechanical responsibilities from image making” [4] frees the photographer from over analyzing the medium’s technical possibilities.

Vilem Flusser, in Towards a Philosophy of Photography, examines the program of the camera. He discusses the camera as the first tool of the information age and the changes to culture exacted by photography’s supremacy over text and by extension, history. He asserts that freedom for the artist comes when the artist “outwits the camera’s rigidity” [5] by pushing the camera and the photographic process beyond their intentions. Diana  cameras present special photographic challenges: a tight square format, no metering system, difficulty in handing the camera and the ever-present hazards of light contamination, yet the simplicity of these cameras operation belies the complexity of effects produced by these machines. Diana cameras afford a direct approach to photographing, an economy of means. Essentially a toy, the introduction of the concept of play is important in understanding the Diana’s attraction. Intuitively, I have been applying Flusser’s precepts with my work with Diana cameras, attempting to outwit the program of photography.

Diana cameras are spoken of as possessing the ability to transmit “personality to subject and photographer:  the inherent but variable effects of blur, of bleeding light, of vignetting function like a blues musician’s bent notes and feedback, turning the most straightforward visual riffs into something sly and oblique.”[6] This association with the blues is particularly important to understanding photographic effects and special attraction to Diana cameras, where “the expressive intensity of the blues derives from its roughness and simplicity.”[7] Like a harmonica player, liberated from the burdens of exactitude, the photographers can risk playful framings,  they can push the blurring of forms, they can experience the joys of play in tandem with the serious business of making art.

[5]Vilem Flusser, Towards a Philosophy of Photography, p. 69.