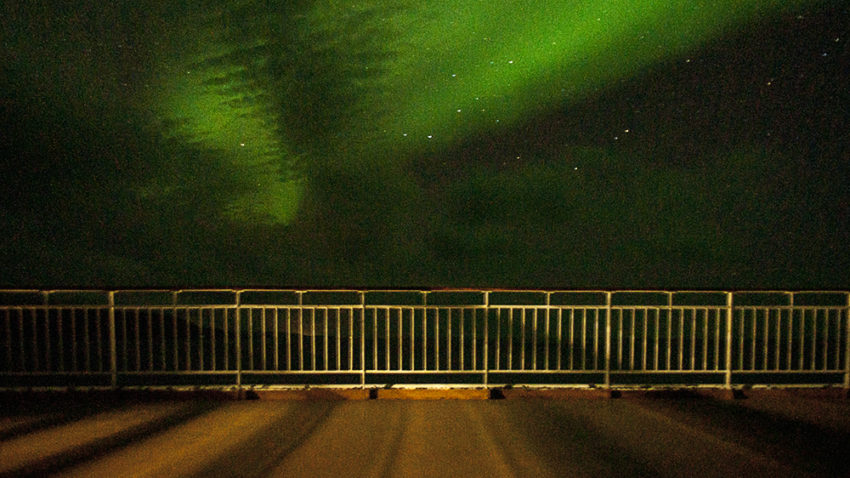 Northern Lights are always occurring, however, they are only viewable when lower levels of light pollution occur, and typically on clear nights in September through April in the Northern Hemisphere. The aurora borealis and aurora australis, the northern or southern lights, are caused by particles escaping from the sun, a phenomenon known as solar wind into space. The particles are trapped in the Earth’s magnetic fields at the north and south poles and when these particles collide with Earth’s atmosphere, they emit light. Particles colliding with oxygen create yellow and green colors; particles colliding with nitrogen produce red, violet, and blue colors. These displays of light appear as bands of glowing light similar to the sun at sunrise or sunset, but also can manifest as moving curtains of light that fill the entire sky.

“ISO” is a measurement of film and digital capture system’s sensitivity to light. Each type of film—black-and-white, color negative, or color transparency—is assigned an International Standards Organization (ISO) rating. The same ISO scale is used and greatly expanded in digital capture systems. The ISO of the film is set at the factory and photographers have limited ability to adjust the film’s sensitivity to light, however with the introduction of digital sensors, photographers have the ability to experiment with the ISO setting with individual exposures.

Higher ISO setting in film produces increased grain; higher ISO settings with digital sensors produce increased noise or the visual equivalent of film grain. Image noise is dependent on the camera sensor, light source, and the length of the exposure. Digital noise manifests as random speckles of color over smooth surfaces in a digital image, as banding, as pattern noise, and as smooth Gaussian noise. Noise is present in all digital images. Reducing noise from an image is a standard problem in all digital image acquisition and processing. Noise typically occurs in longer exposures and when photographing in low light and is most noticeable with a higher ISO setting. Although digital noise typically damages the image quality, in some cases, digital noise can enhance image aesthetics. [1]

Continually in motion, the Northern Lights appear as faint cloth-like bands that suddenly grow in intensity and color. Capturing the ethereal display of the Northern Lights presents opportunities for experimenting with inherent, but sometimes unwelcome effects of digital noise. Recommendations for photographing the northern lights begin with a fast wide-angle lens, a shutter speed of 3 to 5 seconds, and an ISO setting of 1600.  After making test photographs, begin to increase the ISO setting. Many new camera systems provided in-camera noise reduction features which offer further opportunities for experimentation.