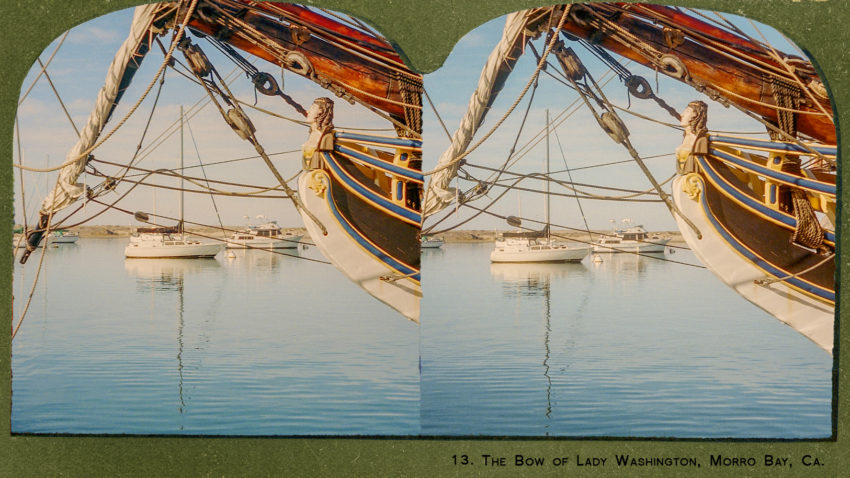 The stereo camera coupled with the stereoscope is one of the 19th century’s most unique inventions. The stereography extended the visual reach of photography and unlike any other photographic process or invention, through the vivid illusion of three-dimensionality, “captured the visual essence of nature.”[1] In the presentation above, I demonstrate how to use Photoshop’s Match Color adjustment tool to transfer the unique color tones from a late 19th-century stereo card into two contemporary photographs created with a vintage Stereo Realist 35mm camera loaded with Kodak’s PORTRA 400 color negative film. [2] The 19th-century stereo card is from the Truman Ingersoll Collection which became very popular after 1898. The stereo images in this card were hand-tinted. Called reproduction views, these cards were the cheapest grade of card published by the Ingersoll Company. Also referred to as “lithoprints”, these cards were sold in sets of 100 views for 85 cents through the Sear and Roebuck’s 1908 mail order catalog. [3]

Stereoscopic vision is the process through which the brain combines vision from two eyes into a single, three-dimensional image. In 1838, Charles Wheatstone, a British physicist published Contributions to the Physiology of Vision and first explained the role of interocular discrepancy for binocular space perception — the phenomena where the right and left eye receive slightly different images.

“It being thus established,” Wheatstone wrote, “that the mind perceives an object of three dimensions by means of the two dissimilar pictures projected by it on the two retinae, the following question occurs: What would be the visual effect of simultaneously presenting to each eye, instead of the object itself, its projection on a plane surface as it appears to that eye?”[4]

Wheatstone answered his own question through an invention he called a “stereoscope,” an apparatus with two mirrors mounted in a right angle and creating a single image to the eyes.

With the advent of the photograph, the range of subjects available for the stereography was extended far beyond line drawings and engravings first seen. In 1849, physicist David Brewster improved Wheatstone’s design, and in 1850, with the assistance of the French optical company Solei-Duboscq, began the manufacture and distribution of his device along with accompanying daguerreotype plates. Brewster’s simplified lenticular stereoscope created a sensation at the Great Exhibition of 1851, where Queen Victoria praised the device and helped ignite the 19th-century craze for stereographs.

While Brewster’s device remained the most popular type of stereo viewer, improvements have continued to this day. Later 19th-century designs included folding or collapsible viewers and opera glass-like extensions, some of which provided variable focus, and the viewing of ambrotypes. [5]  American author Oliver Wendell Holmes was a huge fan of the stereoscope and invented the “Holmes Stereoscope”, the overwhelming most popular design in America in the 19th century. Holmes wrote an article in the Atlantic Monthly in 1858 titled “The Stereoscope and the Stereograph,” where he explained: “Every conceivable object of Nature and Art will soon scale off its surface for us. Men will hunt all curious, beautiful, grand objects, as they hunt the cattle in South America, for their skins, and leave the carcasses as of little worth.” [6] The stereograph became an important communication tool and by the close of the 19th century, closely matching Holmes’s prediction.

In 1849, Brewster invented the stereoscope camera, which created two images of the same scene with two lenses placed on a horizontal axis approximately 2.5 inches apart, and like the Brewster viewer, simulating the average spatial separation of human eyes. The stereograph viewer permitted the viewing and magnification of two photographs on a paper mount, creating the illusion of three-dimensionality. Brewster’s stereograph camera took full advantage of the new wet plate process and signaled the beginnings of the miniaturization of the photographic process. Stereographs were hugely popular, the equivalent in the 19th century of television in our age. Stereographs were made of a wide range of subjects, the most popular being views of picturesque landscapes, monuments, and staged narrative scenes.

The popularity of stereography also stimulated lens design. Stereographic cameras employing special lenses of short focal length, which greatly diminished exposure times. Stereo photography and its suitability for outdoor landscapes inspired a new breed of photographers who embraced subjects outside the studio. Many 19th-century landscape photographers carried into the field two cameras, a traditional view camera, and a stereo camera. Designs for these small cameras proliferated. Small cameras, in the hands of skillful photographers, introduced for the first-time instantaneous street scenes, public ceremonies, and seascapes with breaking waves.

[1] Charles Wheatstone, Contributions to the Physiology of Vision, 1838.

[2] The Stereo Realist camera used for this experiment was a gift from my friend and photographer Frank Hayes. Thank you Frank!

[5] S. F. Spira, The History of Photography As Seen Through the Spira Collection, p. 34.