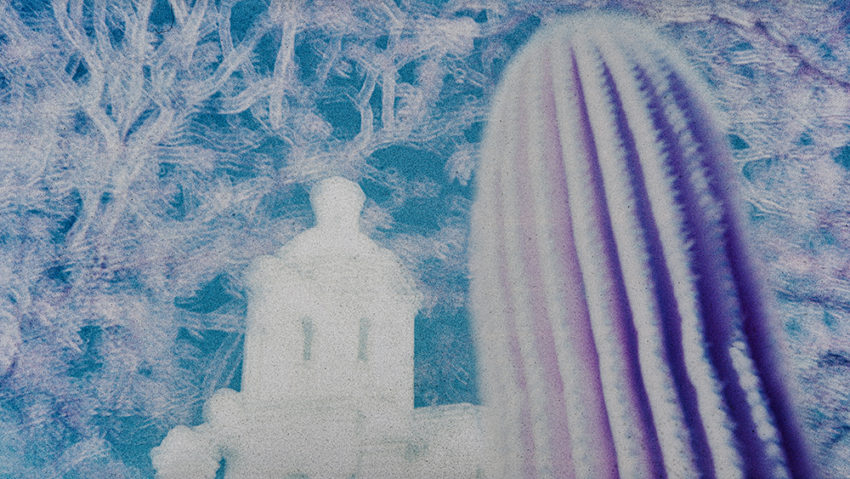 Mission San Xavier del Bac is located about 10 miles south of Tucson, Arizona. Founded in 1692 by Eusebio Francisco Kino, the Mission was the last settlement in a chain of Jesuit missions in the Sonoran Desert.  Setting just a few miles west of Interstate 19, the church is an active parish and pilgrimage site and is the centerpiece of the Tohono O’odham San Xavier Indian Reservation.[1]  Following the destruction of the first mission church in 1770 during Apache raids, the construction of the current church was completed in 1797. Mission San Xavier del Bac is the oldest European structure in Arizona. With its white bell towers gleaming in the Arizona sun, and with walls guarded by saguaro cactus, the church is one of most beautiful in the Americas.

With over 200,000 visitors per year and with tour busses pulling up regularly, Mission San Xavier del Bac is also one of the most photographed churches in America.[2] [3] Given the heavy photographic exposure of the Mission, the stunning white exterior of San Xavier seemed like the perfect location to test the Film Photography Project’s 35mm color infrared film (FPP Color IR) in order to provide fresh viewpoints on this architectural icon.[4]  FPP Color IR film is a close match for Kodak’s long discontinued Kodak Aerochrome color infrared film. FFP’s new film is a welcome addition to the film choices available to experimental photographers. The single roll of color infrared film was exposed using a Holga 35mm Panoramic camera. As directed, an orange filter secured over the lens to achieve enhance the infrared effect.

Exposing infrared film is unpredictable, and this feature remains its greatest attribute for experimental photographers. Infrared film is prone to fogging, exposure irregularities and other hazards of film use, however color infrared when successfully exposed and processed can provide stunning results.  FPP Color IR film can be developed in E-6 or cross-processed using C-41. The dramatic blue and red color shifts in the San Xavier examples were achieved through cross processing this film.  As with all Holga camera models, film exposure is problematic at best with the Holga 35mm panoramic camera and exposed in full sun without metering, the color negatives were underexposed. Still, scanning the film using a Nikon 9000 film scanner to retrieve sufficient detail and post-processing in Photoshop delivered five useable photographs from the 24 exposure roll of the Mission San Xavier’s Bell Tower juxtaposed with the saguaro cactus and the crosses on a nearby hill from the 24-exposure roll. The unexpected and otherworldly color created with the color infrared film speaks to the spiritual traditions and enduring beauty of the Mission San Xavier del Bac.

[1] Roger G. Kennedy, Mission, the History and Architecture of the Missions of North America. p. 126.