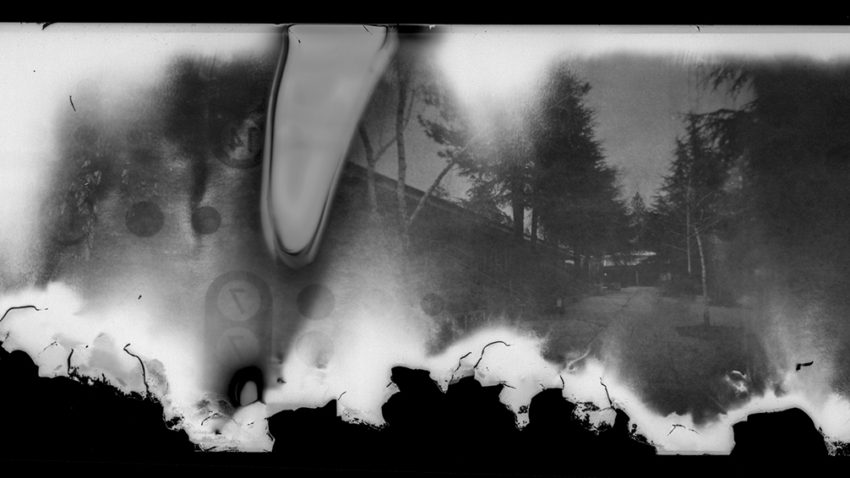 So I have a little brown dog (Elliot).

Eliot is a great dog, my constant companion, a great photo-buddy who jumps to attention whenever I pick up a camera or tripod. However, sometimes he reverts to his puppy personality and chews up clothing, shoes, blankets. Several years ago, he grabbed a roll of 120mm film from my camera bag and chewed it up at one end of the film.

At first, I thought, oh well, another wasted roll of film. Yet, for some reason, I didn’t throw the film away although I believed it was a total loss. Several years later and rummaging through boxes in my closet, I rediscovered the chewed roll of film.  I decided why not see what happens and went ahead and processed the film.

What I find particularly fascinating with the ragged and fogged bottom edge of the film. The frayed edges allowed the imprinting film counter numbers and shape onto the negative creating a Dada-esque juxtaposition with the random and amorphous shapes generated during processing of the uneven strip of film.

The chewed film highlights the experimental results which can be achieved by merging film and with a chance, and remembering the Man Ray quotation, “working directly with light and chemistry, so deforms the subject as almost to hide the identity of the original, and creates a new form.” [1] Yes, my little brown dog certainly created an engaging new form.

The physicality of the film is a key attribute that opens the medium to experiments with a chance as well as the exposure to the elements, time, and the ravages of animals, insects and micro-organisms, and little brown dogs.