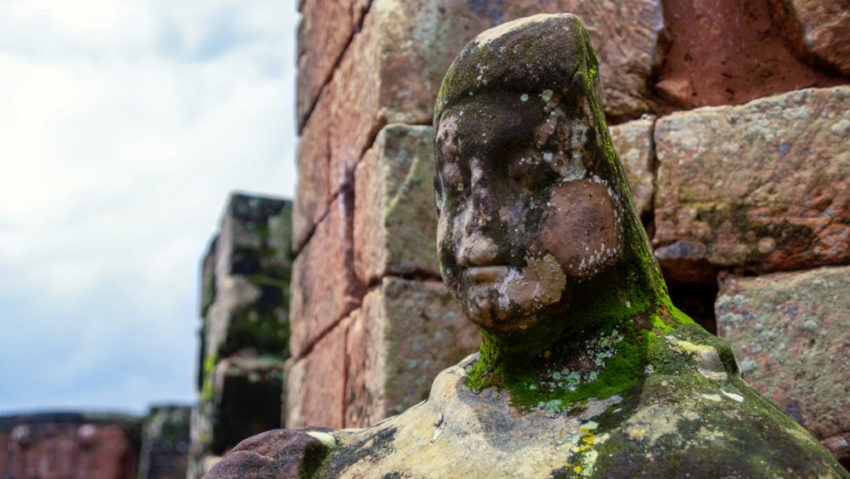 After first establishing a mission at San Ignacio Guazú, Paraguay, in 1609, the Society of the Jesuits would go on to build 30 mission settlements called reductions among the Guaraní people in the fertile river valleys of the Parana and Uruguay Rivers, a region today spanning the countries of Southern Brazil, Argentina, Uruguay, and Paraguay. [1] This isolated region at the edges of the Spanish Colonial Empire,  the Jesuit Province of Paraguay, would become the most successful and controversial collaboration between European colonists and indigenous people. At extremes, critics view the Jesuit reductions in Paraguay as benevolent, enlightened interaction, a Lost Paradise, or as rigid master-slave exploitations of native populations. Pope John Francis, a Jesuit and Argentinean Pope, recently labeled the Jesuit-Guarani Missions as “the most significant experiences of evangelization and social organization in history.” [2] The French writer Voltaire, who was trained by the Jesuits and traveled in Paraguay said the “Jesuits have indeed made use of religion to deprive the inhabitants of Paraguay of their liberties” and “…those of Paraguay have no slaves to till their lands or hew their timber, as the Spartans had; but are themselves slaves to the Jesuits.” [3] By all accounts, the reductions provided the Guaraní protection from Portuguese slave traders and exploitation from the excesses of the Spanish encomieda system. [4] With the exception of a few intact buildings still in use, the reductions in the Jesuit Province remain only as spectacular ruins which only hint at the once vibrant and complex communities.

Operating as an autonomous indigenous state, individual reductions were tightly controlled by the Jesuits as separate communal societies, yet wholly integrated with the Guaraní. The reductions were politically and economically isolated from the neighboring Spanish and Portuguese colonies and here, the Jesuits ruled from a position of moral and intellectual superiority and approached mission work with the conviction of their moral rightness in protecting Guaraní from the abuses of Spanish and Portuguese colonial practices [5]. The Jesuits supervised the daily life of the mission, ensuring the Guaraní attended mass and worked in the farms and fields. Containing no more than 7000 Guaraní, each reduction was led by only a single Jesuit priest and his companion, and with few exceptions for the exchange trade goods, Europeans were not allowed access within the reductions. Prior to joining the Jesuit reductions, the Guaraní lived in small semi-nomadic communal groups. The Jesuits built upon the Guaraní’s prior communal cultural practice and worked through Guaraní elites who performed administrative and religious tasks. [6] The Guaraní were required to provide communal labor, approximately 6 hours per day, and they received regularly distributed shares from their contributions of laborers. [7] In 1732, the reductions reached their population zenith of 140,000 Guaraní with no more than 100 Jesuits supervising the reduction social experiment. [8] These numbers suggest that the Jesuits gained the respect of the Guarani and relied heavily upon their willing cooperation in all aspects of their daily and religious lives. [9] The reductions were vibrant and successful towns, and here, the Guaraní were taught Jesuit Christian doctrine, as well as reading and writing and trades. The reductions possessed well-supplied libraries which housed leading treatises on the arts and architecture. With an intensive focus on education, the reductions became the first fully literate communities in the Americas, publishing the first books in an indigenous language based on grammars and vocabularies compiled by the Jesuits. As a lasting legacy from the Jesuits, the Guaraní language is the majority language of Paraguay, officially given equal importance with Spanish, and taught in every school.

When the reduction population peaked in 1732, the Jesuit Province contained over half of the total population of the Rio de La Plata region. With an average population of 4, 700 inhabitants, the reductions were the most populous missions in the Americas. Organized by a uniform grid plan, each reduction was constructed around a central plaza, which held all of the community’s inhabitants and a large cathedral-sized church. Surrounding the church and plaza were living quarters, hospitals, and workshops. The Guaraní owned their own dwellings and a small plot of land for personal gardens and livestock and actively participated in shaping the mission communities.  The Jesuits successfully integrated Guaraní’s economic, political, and ritual traditions in the hopes of creating linkages with Catholic teachings. [10]  Each reduction had workshops for the construction of furniture, printing, metal works, traditional crafts, painting, and sculpture, however, some reductions excelled in specific and highly sought after media, and artists and apprentices were actively exchanged between reductions. [11]

Under the instruction of the Jesuits, the Guaraní produced sculpture on a large-scale. The Jesuits used workshops as factories for art for the adornment of the reduction churches and for embedding religious ideas, using images and three-dimensional art in support of prayer. Basing teachings on the St. Ignatius of Loyola’s Spiritual Exercises, the arts were central to the Jesuit’s practice of Christianity.  Hundreds of sculptures adorned Jesuit and non-Jesuit churches throughout the Rio de La Plata region. Lacking a tradition in figural art, the Guaraní largely copied European examples, still, the Jesuits synthesized Guaraní religion with Christianity and allowed local artists to express Christian ideas according to local customs. With most remaining Jesuit-Guaraní sculpture datable to the 1740s and 1750s, these striking examples produced by Guaraní artists encourage maker and viewer to use their imagination in prayer and in life; [12] Jesuit-Guaraní statues are still used liturgically today in religious festivals. Like the mission experiment, the Guaraní-Jesuit sculpture is an extraordinary example of the amalgamation of two distinctly different cultures, the Guaraní and the Jesuit Catholicism. Referred to as “Hispano-Guarani Baroque,” [13] the Baroque of the 1600s is deeply expressed in Guaraní religious art and sculpture. Viewing the sculptures a close range, the physiognomy of Jesuit-Guaraní portraits reflects mixtures of indigenous features and combines Guaraní and Jesuit’s faces.

The Jesuits employed art as a vehicle for the transmission of religious teachings and devotion. [14] The prestige and autonomy of the individual artist were secondary and only the smallest portion of Jesuit-Guaraní sculpture is signed, as not even the Jesuits signed their artworks. [15] Guaraní artists worked in small groups of fewer than 10 under the supervision of a Jesuit, and these Guaraní artists are responsible for the production of the vast majority of the reduction sculpture. Similar to European practice, artists worked on paintings and sculptures based on their individual skill level. With no tradition of wood or stone craving prior to the arrival of the Jesuits, Guaraní artists under the tutelage of the Jesuits demonstrated an extraordinary aptitude for figurative sculpture. Jesuit-Guaraní sculptures as Gauvin Alexander Bailey states were “consistently creative and original” and “possess a formal beauty and spiritual presence that ranks them among the great works of world art.” Often carved from a large single block of wood or stone,  these characteristics are best seen in the examples from the Museu das Missões Collection at the Mission São Miguel das Missões, Brazil (below), sculptures which manifest direct connection to the unique features of the original materials. [16] Equally, Jesuit-Guaraní sculpture as a testament to indigenous creativity and enlightened cooperation and adaptation, rank as one of the most compelling examples of arts education in the history of art.

Ravaged by war, political jealousies, court intrigues, and ongoing epidemics of small poxes and measles, the reductions experienced a severe decline in the 1750s. Following the expulsion of the Jesuits in 1768 from Paraguay and the New World, the Jesuit-Guaraní social experiment was placed under secular authority. The missions would survive on the initiatives of the Guaraní for another fifty years, however, by 1810 all of the Jesuit-Guaraní reductions were in ruin. Beginning in the 1980s, government and private organizations undertook efforts to rescue the remaining ruins. Today, the most important ruins exist as UNESCO World Heritage sites, preserved as a significant tourist and cultural destinations.

Note on the photographs: Two large collections of Jesuit-Guaraní sculptures recovered from the reductions are housed in restored mission buildings at the Museo Diocesano de Artes Jesuiticas, San Maria Del Feye and the Museo Diocesano de San Ignacio Guazú, Paraguay. The Museu das Missões, Mission São Miguel das Missões, Brazil is equally impressive and contains sculptures and artifacts rescued from the ruins. All of the photographs for this article were captured with a Sony A-900 full frame digital camera. All of the portraits of the Jesuit-Guaraní sculptures were taken using a vintage 1960’s era vintage Asahi Takumar F/3.5-55mm connected to the Sony A-900 body with a lens adapter. Given the low light conditions present in the mission museums, all photographs were captured with a high ISO setting of 6400, which produced the very pleasing soft grain texture present in the images. The photographs of the mission ruins were taken with a Tamron F2.8 28-300mm lens with an ISO setting of 250. [17]

[1a] Traveling in the Jesuit Province in late December and early January 2016, my wife Margaret and I were guided by our friends Eduardo and Pelusa Argüello de Brajkovic of Abratours of Posada, Argentina. Their lifelong knowledge of this region was an invaluable asset of our travels and greatly enhanced our enjoyment and understandings of this fascinating region.

[1] The first reduction was established in 1609. In the linguistic context of the early 1600’s, Reduccione (derived from the Latin reducer) means to bring people together. Hildegard K. Vieregg, Jesuit Reducciones in the Context of UNESCO World Heritage, MUSEOLOGIA E PATRIMÔNIO – vol.I no 82 1 – jul/dez de 2008, p. 1.

[3] Voltarie, quoted in Julia Sarreal, The Guarani and Their Missions, a Socioeconomic History, p. 273.

[4] First enacted in 1512, an encomienda was a grant by the Spanish crown to a colonist for a specific number of Indians living in an area whom they received tribute. In exchange, the colonist was required to educate and protect the Indians under his control. The encomienda system was designed to regulate and protect Indians from enslavement, but in practice, the ecomienda legalize the enslavement of Indians and the appropriation of their lands.

[7] Julia Sarreal, The Guarani and Their Missions, a Socioeconomic History, p.4.

[8] Julia Sarreal, The Guarani and Their Missions, a Socioeconomic History, p. 1.; See also Massimo Livi-Bacci and Ernesto J. Maeder, “The Missions of Paraguay: The Demography of an Experiment,” Journal of Interdisciplinary History, xxxv:2 (Autumn, 2004), 185–224.

[14] Ramon Gutierrez and Graciela Maria Vinuales, “The Artistic and Architectural Legacy of the Jesuits in Spanish America,” John W. O’Mailley, S.J. and Gauvin Alexander Bailey, Ed., The Jesuits and the Arts, 1540-1773, p. 297.

[17] See Experiments With Digital Noise for an extended discussion of the Sony A-900 Asahi Takumar F/3.5-55mm lens combination.