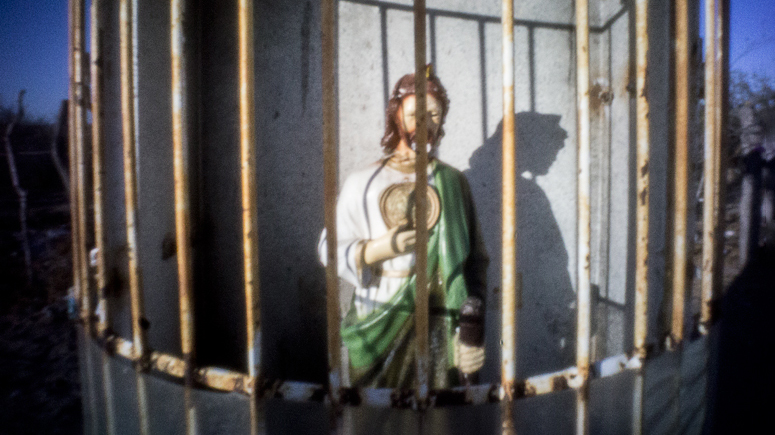 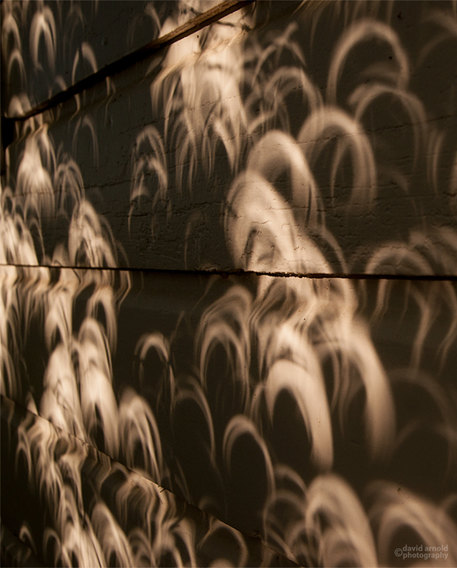 The first written records of the optical properties of pinholes come from Mo Ti in China during the 5th century BC and in Aristotle’s Problems XV written in 330 BC. Dappled sunlight viewed under trees on clear days is evidence of the optical properties of pinholes. The crescent projections of the sun seen during a solar eclipse, as shown above in the pinhole projects during an annular solar eclipse, provides the most dramatic confirmation of the imaging properties of a simple pinhole. Leonardo da Vinci provides us with the most succinct early discussion of the imaging properties of a pinhole in his notebooks: [1]

“I say that if the front of a building—or any open piazza or field—which is illuminated by the sun has a dwelling opposite to it, and if, in the front which does not face the sun, you make a small round hole, all the illuminated objects will project their images through that hole and be visible inside the dwelling on the opposite wall which may be made white; and there, in fact, they will be upside down, and if you make similar openings in several places in the same wall you will have the same result from each. Hence the images of the illuminated objects are all everywhere on this wall and all in each minutest part of it. The reason, as we clearly know, is that this hole must admit some light to the said dwelling, and the light admitted by it is derived from one or many luminous bodies. If these bodies are of various colours and shapes the rays forming the images are of various colours and shapes, and so will the representations be on the wall.”[2]

The introduction of single-lens reflex digital cameras has made the simple practice of pinhole photography even simpler. All that is necessary to create a digital pinhole photograph is to remove the lens and then cover the lens opening with light-proof material. Foil or black duck tape work just fine.  Next, using a small thumbtack, put a small pinhole in the center of the lens opening and you have modified your DSLR into a digital pinhole camera. Offered by several manufacturers, commercially produced pinhole lenses drill pinhole openings to industrial tolerances. Commercially produced pinhole lenses typically produce sharper pinhole photographs, yet still, retain the distinctive wide-angle and an infinite depth of field. Recently, Wanderlust introduced the Pinwide pinhole lenses for Four Thirds mirrorless cameras.

The Four Thirds camera format offers distinct advantages for pinhole photography, and the Wanderlust Pinwide takes full advantage of the unique characteristics of this new camera format for experimental photography. Once the camera is set to “shoot without a lenses” setting (which is found in the customs menus settings), exposures are accurately previewed through live view. Exposures are best achieved by dialing in a manual shutter speed setting.  Without a mirror to move out-of-the-way with each exposure, a very wide-angle of view is achieved through the deep recessed design of the Pinwide. The Pinwide pinhole sits only about a centimeter above the sensor, offering an effective field of view of 11mm (or 22mm factored in full-frame equivalents). The Pinwide pinhole is produced through “precision etching technology”[7] produces distinctive natural vignette, and color shifts to deep blue and magenta are sometimes present within the shadow areas. The subtraction of the mirror from the Four Thirds camera format lessens camera shake with handheld shooting at slower shutter speeds. Even at higher ISO settings of 3200 and 6400, the soft imaging properties of the pinhole produces a pleasing noise structure across the entire image.

The Pinwide at Baja Sur Missions and Churches.

Fan and Our Lady, Church at La Purisma

Shrine at Church at La Purisma

In Baja, a mission or (misión) was a central religious and administrative center which governed an area of several thousand square miles inhabited by scattered groups of native peoples.[8] Coming upon the great stone churches of Baja Sur, particularly Misión San Francisco Javier de Viggé-Biaundó set within a deep mountain canyon and Misión San Luis Gonzaga Chiriyaqui located at the bottom of a low basin in the empty central desert, presents a stunning visual juxtaposition.  Baja Sur’s intact stone missions, remnants of the Jesuit’s 18th century colonization of the Baja Penisula, provides a compelling and challenging subject matter for experiments with the Wanderlust Pinwide lens and the Lumix mirror less camera. Over ninety per cent of the original native populations fell victim to epidemics brought to the Baja Peninsular with the Jesuits. The soft focus and vignetting of the pinhole photographs suggests a communion with the difficult and uncertain past of Baja’s Missions.  The visual texture of the pinhole photographs invokes the atmosphere of ghostly spirituality still present in the austere stone churches of Baja Sur. The colors of the humble contemporary churches built over the sites of former missions emanate a warm glow which speaks to the continued faith begun during the troubled mission period.

In addition, the Pinwide and Lumix G3 were used to photograph roadside shrines found along Highway 1, Baja Transpeninsular Highway, and on roads leading to Baja Sur’s Jesuit Missions.  In addition, large roadside shrines to saints are found regularly along Highway 1 remind travelers to offer prayers and remembrances for the deceased. Typically, family and friends erect shrines to the life and death of ordinary persons, called descansos, translated as “resting place” these smaller shrines are seen at regular intervals along Highway 1 and secondary roads. These folk memorials commemorate not the final resting place, but the place where sudden death interrupted a traveler’s journey or where a traveler was last alive or where a loved one was found after a tragic death. Descansos and shrines to saints have been present in North America since the time of the Spanish conquest.[9] [10] As sites of memory and family pilgrimage, these sites serve as warnings to the living of dangerous road conditions as well as cultural protests to the dangerous conditions of the current road system. Moreover, roadside memorials inject the memory of the deceased into the empty space of the landscape of the highway.[10]

In observance, in passing by, in stopping to read and to photograph, the traveler engages in the ritual space constructed by survivors in remembrance of the deceased. The visual structure of this small series of pinhole photographs embraces the interconnected layers of the past and speaks to the creative force of memory within the transient landscape of the highway.