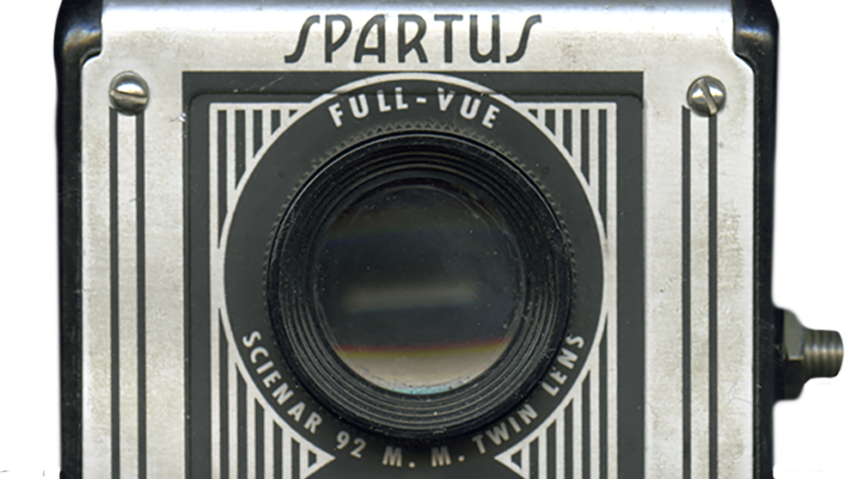 Many notable photographers used twin-lens cameras: Irving Penn, Richard Avedon, Lisette Model, and Diane Arbus. The first twin-lens reflex camera appeared in 1880 as a specially built camera for the Kew Observatory in England. The first production twin lens camera appeared in 1882, introduced as the Academy by the British firm, Marion and Company.  The camera, a non-reflex design featured an upper viewing lens held at eye level and produced the distinctive square image that would come to be associated with twin lens cameras.  Over the next two decades, nearly every major camera manufacturer offered twin-lens reflex cameras standardized on the square format. [1]

Twin lens reflex cameras feature a mirror mounted behind the viewing lens at a 45-degree angle, reflecting light onto the viewing screen. The upper lens is dedicated to viewing and is mechanically synchronized for focus with the lower lens, which is devoted to film exposure. Usually held at waist level to compose and focus, the twin-lens reflex camera offers the advantage of a viewing area identical to the exposure area. Twin lens cameras also offer the advantages of being able to view the exposure as it is being made. In addition, the mirror does not have to move to make the exposure. Traditionally the square format negative was cropped to 8×10 inches, the standard paper size. The large negative of the typical twin lens camera, over 4 times the size of the 35mm camera format, presents advantages for enlargement of selected portions of the image without significant loss of detail. The disadvantages of the twin-lens design are the slight disparity between the coverage area of the upper and lower lens, referred to as parallax error, and a right to left reversal produced by the mirrored image.

The Spartus Full-Vue Twin Lens Reflex- the Spartus Camera Corporation in Chicago, Illinois, produced the Full-Vue Reflex from 1948-1960. The camera is simple to use a twin-lens reflex box camera featuring an image in the ground glass viewfinder equal to the negative size. With a large viewing lens, the Full-Vue boasts an especially bright viewfinder image. In 1949, the Full-Vue also featured a synchronized flash attachment. The Spartus Full-Vue’s bakelite body [3] is fitted with a fixed focus 92mm Scienar plastic lens and takes twelve 6-centimeter exposures on a 120mm film. The Spartus Full-Vue employs a rotary shutter and as the Full-Vue manual instructs “the exposure is then made by gently pressing the exposure lever down as far as it will go.”[4] The shutter has only two settings: “inst.” (about 1/60th of a second) and “time” (a bulb setting for long exposures).

Using the Spartus Full-Vue With Tungsten Film in Daylight:

I loaded Fujichrome T64 Professional 120mm Tungsten film into the Spartus Full View, and used the camera to photograph fall color at three California locations in late October 2013: in the Alder Grove at Yosemite National Park, along the Tenaya Canyon Creek just outside of Lee Vinning on in the Eastern Sierra and at North Bloomfield in the Nevada County. Tungsten films are calibrated for exposure under indoor studio lighting conditions with a Kevin temperature of 3200k producing a much lower color temperature than daylight, which has a Kelvin temperate of 5500k. When shooting tungsten film in daylight conditions, an 85 filter compensates for color temperature disparity and when shooting daylight films in tungsten light conditions, an 80a filter is recommended.[5] Using tungsten film in daylight conditions without color correction filters yields unpredictable results and even with identical exposures on the same roll of film.

At each location, I photographed in basic daylight conditions and exposed the Fujichrome T64 Tungsten film without color correction and without any using a color correction filter. The Full-Vue’s plastic lens produced spectacularly unpredictable results. The appearance of the monochrome reds was surprising, and the deep blues and magentas produced startling mixes of color. The square format of the Spartus Full-Vue supports the muting of image details in the abstraction of unexpected color.

[3] Bakelite is an early plastic first developed in 1907 by Leo Baekeland. Bakelite was a popular material for early camera bodies including many Kodak Brownie models.