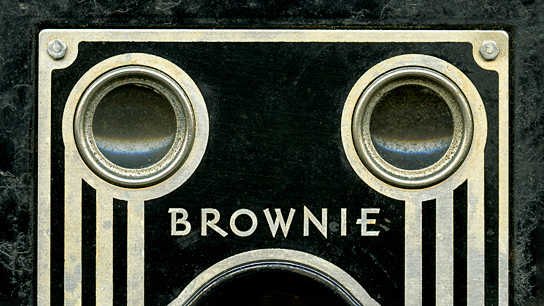 In 1888, the Eastman Dry Plate and Film Company headed by George Eastman, introduced the Kodak camera, a wooden box “neatly covered in black leather”[1] which became the most significant event in the history of the medium since the invention of photography. The camera was loaded with a 100-exposure roll of silver gelatin film attached to two spools and sold for $25. Once all of the films were exposed, the photographer had only to return the camera to the Eastman factory in Rochester, New York, where for $10 the film was removed and processed and a fresh roll loaded into the camera and returned to the customer. When Eastman began work on the Kodak camera in 1886, he paid close attention to the ease of use and the efficiencies of manufacture.  Eastman first announced the Kodak at an annual photographers’ conference in Minneapolis, Minnesota. The convention awarded Kodak a gold medal as the invention of the year. [2] Considering the cumbersome cameras and photographic processes prior to the release of the Kodak, the simplicity of Eastman’s new camera was stunning.

With the release of the Kodak, mass photography and mass marketing were born. Eastman personally controlled all the marketing and promotional details, oversaw the preparation of instructional manuals, advanced literature to suppliers, and arrange for advertisements. The advertising campaign for the Kodak featured women and children operating the Kodak to emphasize the ease of use for anyone without regard to professional training, technical expertise, or aesthetic intention. Most famously, Eastman conceived of the often-quoted slogan, “You press the button—we do the rest.” By the end of the 19th century, the name Kodak became iconic—the brand name for photography.  The Kodak Girl became the symbol of the modern photographer. The Kodak box camera became so popular and successful that the Eastman Company changed the company name to Eastman Kodak in 1892.  Eastman felt the name was “firm and unyielding”, a strong name, and easily pronounced in multiple languages. The name Kodak became both a noun and verb—to Kodak now meant to photograph.[3]

The new Kodak camera was the lead article in the Scientific American, September 15, 1888.

The Kodak was the world’s first successful roll film camera. The Kodak shipped in a wooden box that contained the camera, a carrying case, the Kodak Manual, and the Memorandum of Kodak Exposures, and a notebook that enabled users to record their exposures. The camera featured an innovative lens mounted in a cylinder that rotated to act as a shutter.  The lens was a fixed focus f/9 periscopic lens with a 2.25-inch focal length. The Kodak had a rotary shutter that could be opened by pulling a string; the shutter had a single fixed speed but also featured timed exposures. The 100 exposures of the Kodak were often used for travel and vacation photography where a large number of exposures would be required. Photography soon became associated with leisure, holidays, and major family events. Still, in 1888 dollars, a $25  Kodak was an expensive item. The Kodak served primarily as a vacation camera for the upper classes, and as the Scientific American article noted, “Yachting trips may be illustrated; the pleasure of journeys through foreign countries will be increased by knowing that any novel sight the traveler may see can be caught and preserved to show to his friends.”[4] Prior to the 1880s, each photographer operated as his own handicraft producer of photosensitive materials. In 1889, Eastman introduced a modified version of the original Kodak, now named the Kodak No. 1. Eastman’s new cameras were loaded with transparent film, the standard for Kodak cameras. In 1891, Eastman introduced the Model A Daylight Kodak, a box camera design, which permitted daylight loading of roll film. The new Kodak cameras changed the landscape of photography from a decentralized, handicraft mode of production to a centralized, mechanized mode of production geared predominately to an amateur photography market. Eastman was responsible for the “conception of an amateur camera and a system of photography.”[5]

Eastman’s most successful line of box cameras was introduced in 1900 when the company introduced the famous Brownie box cameras. “Brownies” were cartoon characters created by Canadian illustrator Palmer Cox and were featured in magazines and later in his very popular children’s books. Eastman appropriated the Brownie’ name and Cox’s characters in his advertising campaigns without attribution or paying a licensing fee. [6] Eastman’s advertising equated owning a Brownie camera with the fun-loving, adventurous Cox characters who were always on the cutting edge of new trends and technology. By marketing the Brownie to children, Eastman signaled that the camera was easy to use. He bet that as children grew older they would purchase newer and more expensive Eastman Kodak products. Eastman courted adult buyers by advertising to children, and as one headline proclaimed, the Brownie was a camera “that you and your dad can enjoy together.” [7] Widely advertised in popular magazines of the day, the Brownie sold for a fraction of the price of the Kodak No 1, a marketing and promotional strategy that ushered in a steady stream of film, print processing, and accessory sales. Unlike the original Kodaks, anyone could afford a Brownie and more than 150,000 Brownie box cameras were sold in the first year of production—a marketing success that launched nearly 200 separate camera models with the Brownie name and established the Eastman Kodak Company as the dominant force in photography for 100 years. [8]

Brownie box cameras had a simple meniscus lens or doublet lenses with a fixed focus of approximately 8 feet to infinity and a rotary shutter with speeds of approximately 1/25th to 1/50th of a second plus a bulb or long exposure setting. Box camera bodies contained waist-level finders and were made of cardboard or metal covered in leather. Early Brownies accepted numerous film sizes, with later models standardizing on 116 and 120 roll films.[9] Many notable photographers were introduced to photography by the Brownie camera, including Ansel Adams, Henri Carter Bresson, and Edward Weston.

In October 2013, I took three Brownie cameras, a Brownie Model B No. 3, Brownie No2 A, and a Brownie Target, loaded with 35mm Kodak Portra 400 color negative film to Mono Lake to photograph the tufa towers along the southern shore. Mono Lake, in Mono County, California, near the California and Nevada border, is one of the oldest lakes in North America, naturally alkaline and salty. The lake’s most prominent feature, large tufa towers along the shoreline, form as freshwater springs bubble calcium carbonate into the alkaline waters of the lake.  Calcium and carbonate form limestone to produce the tufa towers, some as tall as 30 feet high. With the lowering of the lake levels through the diversion of water to the Los Angeles basin, the large tufa towers are easily assessable and have become a popular destination for tourists and for photographers. [Click on thumbnails to enlarge images]

With the Brownie No2A and the Brownie Target, I loaded a single roll of color negative film, and with the Brownie Model B, which has a large format negative area (3 inches by 4.25 inches), I loaded rolls of 35mm film side by side. Prior to loading the camera with 35mm film, a test roll determined the crank rate for advancing the film, and all potential light leaks were taped. Without a light film changing bag, and because of the way the film needs to be loaded and unloaded into the box cameras, I could only shoot one roll per camera. Once shot, the 35m film needs to be re-spooled back into the 35mm cassettes using a 35mm camera with a manual re-winder, and of course, these procedures must be done in total darkness! The Kodak Portra when processed using Walgreen Drugstore’s one-hour film processing. The film processing produced a decided shift to the blue. After scanning, the film was color corrected with Photoshop.

While photographing with the Brownies at Mono Lake, I noticed photographers in the bright October sun with cameras of all shapes and sizes. Using 3 Brownie Cameras which spanned the box camera era and ushered in the snapshot was therefore an appropriate match for the popular contemporary photographic destination of Mono Lake.  In selecting the narrow format of the 35mm film, I hoped to accentuate the vertical white forms of the tufa towers. I was uncertain how the Brownie’s meniscus lens would respond to contemporary color film. I was happy with the uneven results and I felt that the bleeding of color seen along the film edges and through the 35mm sprocket holes spoke to the corrosive landscape and natural processes of Mono Lake. Equally, the uneven color that resulted from light leaks and one-hour film processing is suggestive of the chemical staining and the residues associated with 20th-century film technology introduced in earnest with Brownie cameras. Although the original film used in the Brownie cameras did not contain sprocket holes to guide the film through the film transport, the random holes of the 35mm film sprockets speak to the continuing limits of photographic representation. All told, it was a great afternoon! 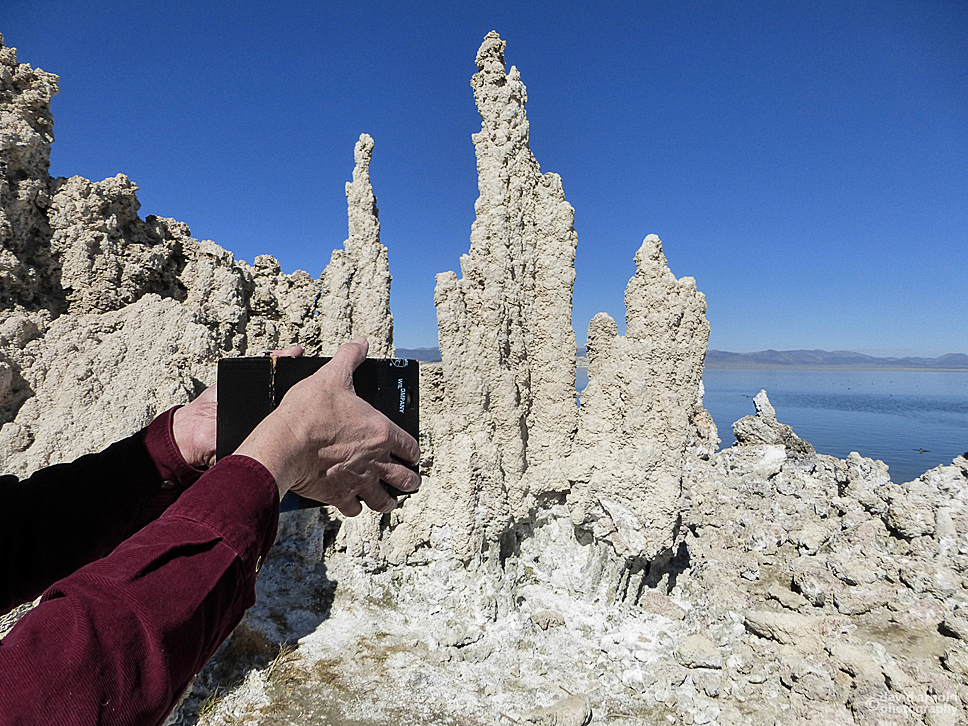