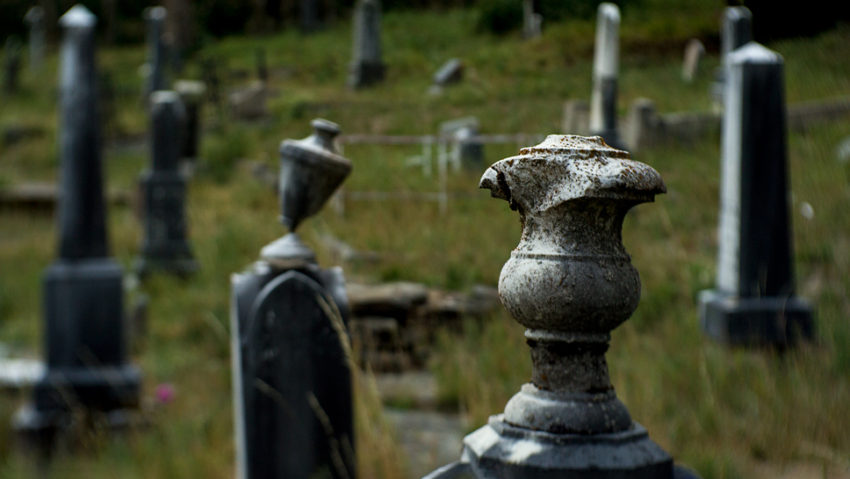 Situated at the bottom of a deep narrow canyon at the confluence of the Downie and Yuba Rivers, Downieville, California prospered from the gold taken from the fast-moving alpine rivers and streams. At the peak of the Gold Rush, about 5,000 miners worked extensive hydraulic diggings and deep rock mines in the area. Then, Downieville was one of the largest cities in California.  Today, about 300 permanent residents enjoy the isolation and beauty of the canyon.[1]

On a steep slope on the north side of the Downie River canyon and about a mile upriver from the confluence with the Downie and Yuba Rivers sits the Downieville Cemetery. Founded in 1876, the Downieville Cemetery followed trends established by the rural cemetery movement begun in the early nineteenth century. Sometimes referred to as the Masonic Graveyard or Pioneer Cemetery,[2] Downieville’s cemetery consolidated graves from two small cemeteries begun near the town center. Like nineteenth-century rural cemeteries, the Downieville cemetery merges styles drawn from a multiplicity of landscape garden motifs: obelisks, miniature columned gates, urns, Gothic-inspired wrought-iron grave enclosures, angels atop tall monuments, cherubs, and holding hands craved into gravestone reflect the shifting nineteenth-century views on death and the remembrances of the dead.

The rural cemetery served the expanding nineteenth-century urban culture as a place of moral improvement and social reform and suggested that death was a presence, a long sleep and that the graves set in a natural setting would be eternal homes. As a nature sanctuary, a nineteenth-century rural cemetery is a place of memory and beauty, with an emphasis not on death, but on art, hope, and transcendence.[3] The American rural cemeteries were founded on the needs for healthy burial grounds placed away from the expanding population centers and on the Romantic movement’s connections to nature. Based on English landscape garden plans, rural cemeteries were designed as the first public parks and expressed a nostalgia for death culled from classical authors such as Virgil [4] :

“Then we are sent to spacious Elysium, a few of us to possess the blissful fields. All these that you see, when they have rolled time’s wheel through a thousand years, the god summons in vast throng to Lethe’s river, so that, their memories effaced, they may once more revisit the vault above and conceive the desire of return to the body.” [5].

Downieville’s historic cemetery exemplifies the picturesque tradition of the nineteenth-century rural cemetery: a ramshackle gate opens onto a place of quiet contemplation and meandering steps and paths lead in no particular direction,  and unkempt bushes, vines, and tall grasses spread over grave enclosures. Dead branches and trees co-exist alongside new growth, to suggest that death is a natural cycle, and even when the river is low, and like Virgil’s Elysium, the sounds of rushing water filter over the picturesque landscape of death.[6]

I arrived at the Downieville Cemetery just as the sun dropped into the top branches of the pine trees at the ridgeline. At first, disappointed that I had missed the light, I began to wander up the steep hillside over the terraced cemetery grounds. About halfway up the hill, I began to notice a diffused light bathing the gravestones in a soft and even glow. As I began to photograph the gravestones and enclosures in earnest I became fascinated by the uneven placement of the gravestones on the terrace slope. Some of the grave monuments stood tall, while others leaned forward and back creating diagonal and overlapping lines and shapes in the viewfinder.  The steep slope of the hill accentuated size distortions generated by the reduced angle of view offered by the portrait lens which I selected for this series.

The overlapping of weeds, grasses, gravestones, and monuments continues the picturesque intentions of the rural cemetery movement. The soft bokeh generated by the portrait lens speaks the nineteenth-century sentimentality of mourning. Nineteenth-century gravestones stood as markers for the departed and photographs I created are intended as portraits of those gravestones and monuments left in remembrance of the departed.

For the Downieville Cemetery series, I used Fujian China TV GDS 35mm F1.7 lens purchased new from Amazon for $22, and a simple screw-mounted lens adapter was an additional $9. The Fujian China TV GDS 35mm F1.7 lens is surprisingly sharp at the focal point, with a soft bokeh falling off from the center of the image. The 35mm F1/7 mounted to the Lumix G Micro Four Thirds camera is the equivalent of a short telephoto or portrait lens on a 35mm format film or full-frame sensor camera. The introduction of the Micro Four Thirds camera systems has opened new fields of experimentation with inexpensive manual focus lenses. With a thinner camera body achieved by the elimination of an internal camera mirror, the Micro Four Thirds lens mount has a flange focal distance of 20mm, a very shallow distance which permits the use of a wide range of lenses from manual focus 35mm to C-mount lens. The C-mount standard, first introduced by Kodak in 1923, was engineered for 16mm film and 8mm film cameras. In the 1950s, television and early video cameras employed the C-mount standard.[7] The C-mount lens is surprisingly inexpensive. I was very happy with how the Fujian 35mm F1.7 lens imaging characteristics support the formal, conceptual, and aesthetic choices expressed with the Downieville Cemetery series.