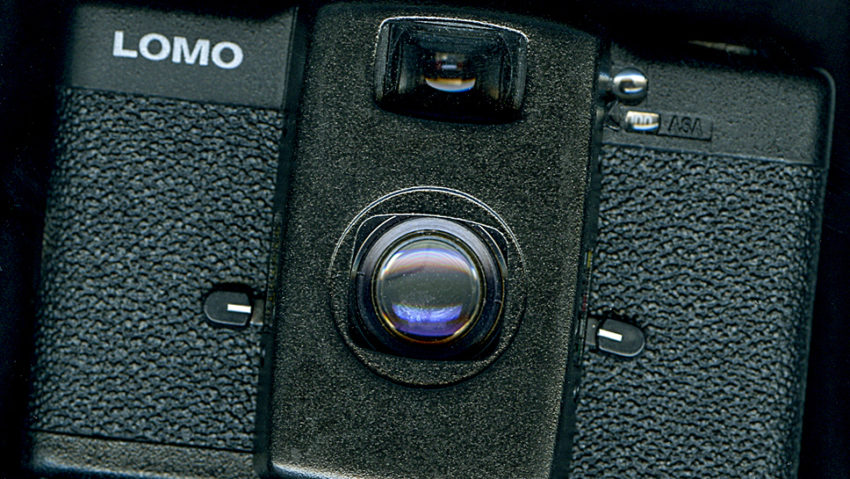 The Lomo LC-A is a wonderful little camera. With a sleek black design, and ease of use, and the unique Minitar 1 wide-angle 32mm f/2.8 lens, the Lomo LC-A inspires play and experimentation. First introduced into mass production in 1984 during the last decade of the Soviet Union, the Lomo LC-A was designed as a copy of the Japanese compact Cosina CX-1, and was intended to be a people’s snapshot camera. The camera was exported to Eastern Europe and discovered in Prague in 1991, after the fall of the Soviet Empire by a group of Austrian students and photographers. In 1992, the Lomo LC-A birthed the Lomographic Society International, a conceptual, experimental, entrepreneurial, and an early Internet association of photographers. The Lomo LC-A became the Lomographic Society’s flagship product. In 1997, the Lomographic Society convinced the post-Soviet regime to begin production of the Lomo LC-A, a version of the camera, which has remained in production until 2005. A replacement Chinese production LC-A+ with a Russian lens was introduced in 2006 and after 2007 the Lomo LC-A+ has been manufactured in China with a Chinese manufactured Minitar 1 wide-angle 32mm f/2.8 lens.[1] The Lomo LC-A+ cameras is now available with Russian made lens or with the Chinese manufactured version and features expanded features such as a multiple exposure option and expanded ISO settings up to 1600. [2]

For several years, I have been using the Lomo LC-A for the distinctive edge vignetting produced by the Minitar 1 wide-angle 32mm f/2.8 lens, and for the Loma LC-A’s ease of use and lightweight design—the small palm-sized camera is easily carried in a pocket or added to a camera bag.  I’ve found that the Lomo LC-A coupled with a cross-processed transparency film produces a wholly unique color scheme. Cross processing involves intentionally developing film in chemistry not recommended by the film manufacturer.  The results can be spectacular. With cross-processing contrast, color saturation and grain are increased.  In general, cross-processing enhances the abstraction of forms and shifts to brilliant green and blues are most common.

Color film contains blue, red, and green dye layers plus silver-halide crystal layers. Color results vary according to the silver halide grains that correspond to the amount of light recorded on each layer. Color film processing employs specially engineered chemicals that react to produce color couplers on the image-forming layers.  The silver halide crystals are removed in the development and bleach steps. The final color image contains only dyes: the blue-sensitive layer forming yellow-colored dye, the red-sensitive layer forming cyan-colored dyes, and green-sensitive layers forming magenta-colored dye. In conventional color processing, the color image is closely representative of the scene in front of the camera lens. Cross processing uses the complexities of color film image formation to produce unexpected and unique results which varies according to the dye composition of each film stock. [3]

Color transparency or slide film is normally processed in E-6 chemistry. Rather than processing the film in the manufacturer’s recommended E-6 process, I intentionally developed my Lomo LC-A  film in C-41 chemistry, a process used by one-hour photo labs which is intended for processing color negative films.   Cross processing unlocks unexpected and dramatic results by substituting different chemicals from those recommended by the film manufacturer, producing color schemes not achieved by any other means, including digital post-processing. To accentuate cross processing effects, my Lomo LC-A film is scanned to CD’s immediately after processing, producing an impressionistic noise structure. Cross processing, and especially when coupled with the Lomo LC-A, produces intense, electric, vibrant colors, converting an ordinary scene into an expressive event.