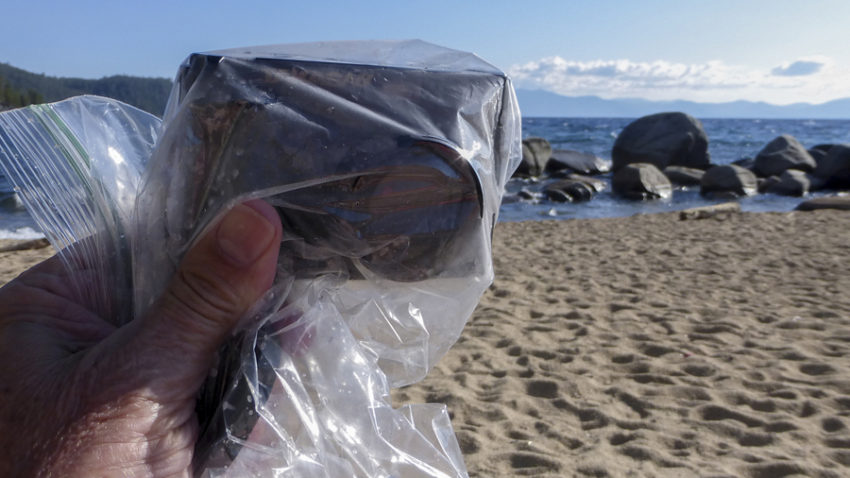 Chimney Beach, a narrow band of sand on the east shore of Lake Tahoe, is accessed by a trail from Nevada Highway 28. The beach is managed by the Nevada State Parks Department and is named for the lone chimney nestled at the top of a small cove, the only structure of any kind found in the area. Dense outcrops of smooth granite boulders line the shore and spread like tiny islands along the narrow underwater shelf on the lakeshore. The views from the beach looking to the southwest are spectacular and when the winds come up in the afternoons, small waves break against the granite boulders and on the sand strip, generating an ocean-like experience.

At Chimney Beach (with the Takashi EZ F521 Digital Camera in a freezer bag).

The intense natural beauty of Chimney Beach has inspired many photographic field trips. On a recent trip, I experimented with Takashi Digital FX 521. Since being released in 2009, the small retro-styled digital rangefinder is marketed under several names: the Yashica Digital FX 521, the Takashi Digital FX 521, Lomo JOCO VX5 Digital Camera. Referred to as “Digital Holgas”, “Digital Dianas”, or “Digital Lomos”, the little camera shares little in design these earlier film cameras, however, the camera’s lack of creative controls and small plastic lens are suggestive of popular film-based toy cameras.

The Takashi EZ F521 sells for about $99 from Amazon and eBay. The palm-sized camera makes it an easy second or third travel camera. Most promising about the Takashi EZ F521 is the pleasing and smooth film-like quality of the noise. Other features include two fixed focus settings, landscape and “macro”; an optical viewfinder; a 5mp 1/2.5″ CMOS sensor with interpolation up to 12mp, with interpolated images generate the most pleasing noise; a 3 inch LCD screen; and 640—480-pixel video capture.