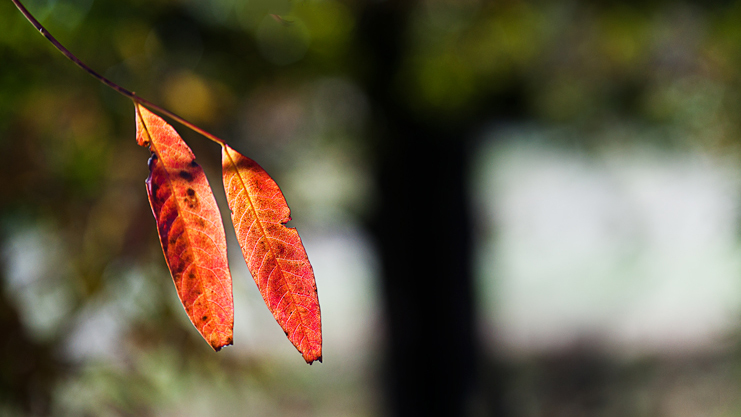 Early references to the Chinese Pistache tree (Pistacia Chinensis) appear in Ernest Henry Wilson’s A Naturalist in Western China. Wilson notes that the hardwood of Chinese Pistache forms “a natural “fork” at one end and is in general use for the balanced rudder on all the larger boats.” [1]The tree is drought and insect resistant and can be grown in hot dry climates in poor soils. Easily maintained, the Chinese Pistache has become a popular choice for plantings along roadways, parking lots, and as a shade tree. Young trees are scraggly and asymmetrical; mature Chinese Pistache trees reach 40-50 feet and grow into a uniform and dense oval shape. With dark green foliage, the long narrow oval-shaped deciduous leaves of the Chinese Pistache become a riot of red, orange, coral, crimson, purple, pink, yellow in the fall.[2]

Purple and Orange Leaves Against Trunk

Several years ago, I noticed a lone Chinese Pistache tree set amid the Blue Oak savanna of the Spenceville Wildlife Area. From a nearby road, the lone Chinese Pistache in full fall display was the most prominent visible evidence of an abandoned ranch site set in a meadow below the low ridgeline. In 1942, the United States War Department purchased ranches in Yuba and Nevada Counties in the Northern California Foothills and joined the properties into Camp Beale, a training ground for the 13th Armored Division.[3] Following the war, the property near the Chinese Pistache was added to the Spenceville Wildlife Refuge. The tree is spectacular from middle October into December and commands the meadow at the edge of the abandoned ranch site. The variegated color of the lone Chinese Pistache tree with the long drooping lower branches provides a continuing subject for experimental photography.

In the Red Tree series, I selected a vintage Minolta MC Rokkor-X 58mm lens to create a series of photographs of the Chinese Pistache tree, following the changing foliage through the fall season. I selected the Minolta Rokkor 58mm lens for the opportunity provided by the lens to highlight the lanceolate shaped leaves of the Chinese Pistache tree, and render the changing colors of the canopy and branches in a soft glow. Featuring an F/1.2 aperture, the manual focus lens is one of the fastest lenses produced for still photography. The highly regarded lens was manufactured in the 1960s and is now prized for the smooth bokeh produced even at the largest apertures.

The term bokeh first appeared in photography discussions in the late 1990s.[4] Taken from the Japanese, bokeh originally referred to the blur present in ink-wash painting;[5] In photography the term is now applied to the blur present in the out of focus areas in a photograph. Determining the sharpness of a particular film, lens, and now our sensors dominate the technical and aesthetics discussions in photography. Discussions on bokeh have opened a dialogue on the aesthetics of blur, blurring, and out of focus elements in photographs as well as encouraging research and development of lens, software, and techniques to achieve bokeh. Ironically, the term bokeh has sharpened discussions of the aesthetic qualities of blur and out of focus areas of a photograph as well as the particular characteristic of lenses and lens designs in creating expressive blur in a photograph.

Details: Minolta MC Rokkor-X 58 mm f/1.2 Lens with an optical adapter for Sony DSLR. Aperture setting between F/1.2—F/2.8. Note the smooth gaussian blur that is present in the out of focus area of the details. Details shown at 100% views. (Click on thumbnails to enlarge.)

Understanding the limitations of current lens designs is at the core of what we call photographic seeing. With current lens designs, during image formation, only one point of the image is in absolute focus, a point referred to as the focal point. During image formation, and restricted by the aperture, light rays form cones of light. If the point of light is not at the point of sharp focus each point of light images as a disc of light, known as a circle of confusion. The overlapping discs of light cause the image to look less sharp, forming bokeh, or the out of focus area of the photograph. The farther from the point of sharp focus, the larger the circles of confusion become, and the more out of focus the image appears. If the size of the aperture is reduced the cones become narrower and the circles of confusion become smaller resulting in a sharper image and reducing the amount of bokeh.

Details: Minolta MC Rokkor-X 58 mm f/1.2 Lens with an optical adapter for Sony DSLR.  With aperture settings between F/1.2—F/2.8, note how the lens produced discordant hard-edged circles of confusion in the highlight areas. These areas exhibit what is often termed “bad bokeh”.  Note as well, that “good bokeh” and “bad bokeh” are created with the same lens at the same aperture setting. Details shown at 100% views. (Click on thumbnails to enlarge.)